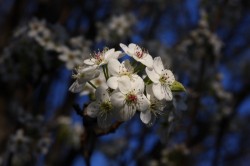 This last week was VBS at our church. We decided to do it during spring break this year (like we did a couple years ago) so as not to have to compete with other area churches for attendees.

We had a sort of kickoff/egg hunt last saturday and started the actual program on sunday night and ran it thru wednesday. Overall, I think it went very well.

In addition to my usual duties as A/V / computer-tech guy, I also got to be the "official" photographer for the week. I think I took about 300+ shots - about 160ish of which I felt were good enough for the slideshows that I put up prior to the opening each night (of the previous night's events). I have posted the handful of shots that I feel are truly wonderful in the VBS 2008 Gallery, as well as a few others I thought were pretty good for various reasons.

The weather this last week has been great overall. I even mowed the lawn (well, the front and part of the back anyway) for the first time this year today. Due to this fortuitous circumstance, we decided to go on a picnic friday afternoon at Sycamore Shoals and then walk around a bit. A few more images have been added to the Sycamore Shoals Gallery.

Later that afternoon, Sheri and I went over to Milligan to walk around and take pictures - the campus is mostly empty this weekend due to Easter and it seemed like a good time to shoot scenery without being in peoples' way. Several more shots have been added to the Milligan Gallery as well.

In addition, a few other, random pics have been added to a few other galleries (like the one I've included in this post). All told, I'm sure I took over 500 pictures this last week... EDIT: Actual count of pictures downloaded to my computer from the last week is 706 - which of course isn't counting the ones that i erased on the camera. The actual total for shots taken is probably well over 1,000.

Oh, and there will be some certain, other shots posted a little later... ;)