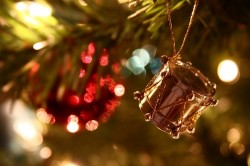 So all of our company kind of left us at the same time. We went from having 8 people in the house to 2 in a matter of a few hours. My parents & sister arrived on tuesday evening and stayed till this afternoon and Sheri's family started back to AR this morning. It was a good holiday though. It was great to see everyone, and was nice to have people come to us instead of having to travel.

We had christmas with my parents last night in addition to the hanging out and playing games typical of new years eve. I was even able to find a video stream of Time Square for the final countdown (and not a SECOND sooner). Also, today's my dad's birthday and we took him out to lunch to celebrate. Additions to the already awesome holiday loot include (but are not limited to) Paper Mario, Wii Fit, an old-but-reintroduced Fantasy Flight game called 'Talisman' (that I'm *sure* I was talking to someone about recently), an 8gb USB flash drive, dvd's of My Fair Lady and Lt. Robinson Crusoe and some more $$ to put toward my camera gear (i'm currently about 2/3 of the way to the telephoto lens i want to buy) - and my brother did this awesome oil sketch/painting of sheri & I from a picture we'd sent him.

62 of the best pictures from the festivities are up in the Holidays 2008 Gallery.

Well, I've had my camera for a little over a year now, and I've learned a *lot* since i started out. I took approximately 11,700 pictures in 2008. I'd say probably about half of those made it off the camera. I have posted what i believe to be my best work in a 2008 Portfolio Gallery. These are the pictures that I really like and/or I think are good enough to be proud of.