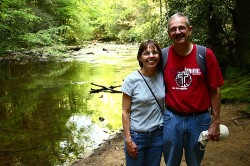 Well, my parents were in this weekend - it's always cool to have them. They don't make it down here enough, really... ...and we don't make it up to IN much either.

After they arrived on friday, we went out to play some golf. I played only using 5, 7 and 9 irons and a putter. I have discovered this does not negatively impact my game - in fact, I think it makes it a bit better overall. I've decided i'm not cool enough to use other clubs, so i'm gonna stick with these for a while. Or, as Jody put it, I haven't "unlocked" the other clubs yet. I think I need to reach 200 good shots with the 5 before I unlock the 2 iron...

I think my dad fixes something every time he comes to see us. This time, it was a leak in the shower dripping into the basement... ...oh, and also our outside water spigot which seems to have developed a tradition of freezing and breaking every year, no matter what I do to prevent this. We think it's good this time though. Probably.

On saturday, we gave dad an early fathers' day present. It was a picture frame. He'd said he wanted a print of one of my photographs so I decided I'd let him pick one. Well, we got to talking and he said he really liked several of them, but asked if I had a picture of the creek from the Laurel Falls trail (which we'd hiked earlier this week on Memorial Day), but with smoother (aka "fuzzy") water. I said no, but that I could. I'd wanted to go back there anyway, since we had some trouble finding part of the trail last time. This, in turn, spawned an expedition.

The four of us (dad, mom, me and Sheri) went out to the Laurel Falls trail again with the intention of me taking a particular photo. We waited till mid-afternoon (so that by the time we got there it would be late afternoon), and then headed out to the trail. I took quite a few more pictures this time - including some slow-exposures with a tripod (which i didn't have with me on monday). I got some pretty awesome shots, I think.

We ended up hiking the whole trail which, contrary to what i'd previously heard, isn't really any easier than the upper trail: it's difficulty is just a bit more spread out (as opposed to being incredibly rough at the end). On average, I'd say the two trails are comparable.

Aside from Sheri's ankle (which has been sore for a while), it was a good time. I've recompiled the pictures that I took on monday and added the new ones to the collection in the Gallery. Dad ended up choosing the wider shot of the falls for his frame, though we got prints of two others as well (since he couldn't pick just one).

They headed back to IN this afternoon. Back to the normal routine.

Contrary to the way it might seem in the title the plumbing and the waterfalls were not in the least bit connected! :-) It seemed like a fairly important note!

I was hoping to be able to take you all back out there again, since we went on Sunday morning. Glad you had a good hike!

Yeah, we should definitely all go out hiking sometime - back there again or somewhere else. ~PS

Can we wait til my foots better? It thought it was a mistake on Saturday. Not a good idea! Ah well! I survived! Are there any easier hikes we could do in the mean time?