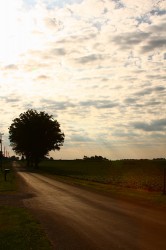 As some have commented, not too many knew we ever left. Probably because it was the sort of trip that was difficult to be real "excited" (and therefore talk much) about.

Last friday Sheri and I headed up to IN. The main reason for the trip was to go to the memorial service for her grandmother, who passed away back in april. As you might expect, it was a nice, if somewhat sad, time.

We spent some time with some of sheri's dad's family - for the first time, really. Stanley and Bonnie were hosting us as well as sheri's parents for the weekend. They were really nice and fun to chat with and we ended up talking with them for quite a while after her parents left on monday.

We also got to meet Ben's fiance. She seems nice, if quite shy. It was kind of a shame we didn't get more of a chance to hang out.

We also stopped in on my parents for about a day, which was great. We played some games and talked and generally had a good time.

While we were there, a rather significant storm system came through tuesday morning that resulted in flooding, power loss and downed trees. the downed trees resulted in a bit of a wet adventure as we tried to make it back to their house from lunch.

And, as I try to do each time I go to IN, I had Noble Roman's pizza and breadsticks. Tasty.

I put a few pictures from the trip up in the Gallery - mostly pictures of scenery and small children.


On some other stuff:

About a week ago we had the 3rd session for Little Fears (session synopsis on the gaming page soon). It went so-so. It was a little slow and certain elements didn't manifest quite the way I'd hoped, but it was alright. Hopefully next session will be a little more satisfying.

Last thursday we (me, robb, josh & bill) had our second band practice. Improvement from the previous session was 100%, not that that first practice wasn't great. That was the most fun I've had playing guitar in 5 years or more. :) Right now we're just doing cover songs, but we've talked briefly about maybe trying to write some stuff. We've also talked about possibly playing some small local shows once we get good and solid. We're planning to get together tomorrow for more fun. On a related note, I should be getting an eq to run my amp through soon.

Practice should be fun tonight.. even though I haven't practiced much since our last 'jam session'. But now that you're back, you need to decide about coming to G.I.Joe....