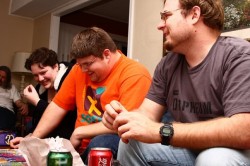 Still trying to get back into the normal swing of things after a couple of relaxing weeks.

We had a great time over new year's with a bunch of awesome friends. We basically spent the long weekend hanging out and playing lots of games - including a midnight game of New Year's Kubb. Robb & Edie were awesome hosts in their spacious new house, and it was great to get to see Jerry, Amanda and Stacey again. Plus Llama and Tim were there, which always makes for entertainment. :) I've got some pics of the festivities up on facebook.

I've finished compiling most of my favorite photos from 2009 (and the ones that I think are "good" from a technical perspective), and have created a home for them on my Gallery page.

On a more musical note (ha!), I'm still not sure whether I'm going to make another attempt at completing RPM this year. I really *want* to, as I've been upgrading some hardware & software in my "studio", have been helping Steve record some tracks, have been streamlining my approach to the recording process and have learned quite a bit regarding the enhancement of the quality of the tracks I put down... ...unfortunately, when it comes to actual material to record, I am all but completely dry atm. I've been trying to come up with some stuff for the last week or so (albeit, pretty sporadically), but haven't had any luck. If I can come up with a few likely tracks before Feb 1, I'll probably give it a go... ...otherwise, I may sit out this year.

In other news, I'm trying to work out some scheduling get my gaming group(s) back together after the chaos the holidays generally bring regarding this hobby. I've been working on my Mouse Guard campaign, which I'm excited about. I'm intending to pick up a few other games reasonably soon as well and I'm hoping to run and/or play with some greater-than-usual variety this year.