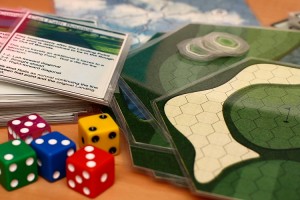 So, Sheri and I were trying to save a little money this year with respect to Christmas gifts, etc.  Also, I like to think I'm a pretty creative guy.

My parents (particularly my mom) really like golf stuff.  They know me and Sheri like all kinds of games, so I decided that making a golf game for them.

The mechanics of the game went through several incarnations over the months leading up to the holidays, but there were a few things I knew I wanted from the beginning:

1) I wanted a modular course.  Something like tiles that could be combined in a large number of combinations to make different holes.

2) I wanted a dice mechanic for determining the distance/accuracy of shots.

3) I wanted a choice mechanic for choosing clubs

4) I wanted a fair degree of simulation - including mechanics for wind, hazards, fairway/rough lies etc

5) I wanted some fun chance effects and one-time-use cards that could modify shots with theme-based effects.

What I ultimately came up with did a fairly good job of capturing these things, though I'm still not 100% happy with it.

A given hole is composed of 6-inch hex tiles hex-gridded with 1/2 inch hexes.  Each tile has coterminous fairways such that the tiles can be layed out to form a hole.

Shots are taken by aiming for a given hex and rolling four dice - two pairs which represent the two axes - left/right and forward/backward.

Each player also gets a number of cards that can be played on him/herself or on other players that have a variety of effects: making lies better or worse, gusts of wind, mulligans, etc.  These cards are played once and then discarded and players can gain more cards as the game progresses.

There are, of course, a great number of nuances to the particulars of these basic mechanics - and I think there are still some things that could be streamlined - but that is the gist of it.

I playtested this game with Sheri a bit before we gave it to them, and the four of us played a game when they were here.  I think they liked it and, overall, I think the project went very well.

Hello, I hate to barge in like this...but I think this idea has incredible merit. I'd like to order a copy. Think thats possible?

By all means, barge in. And welcome. Glad you like the idea. The 'prototype' that i gave to my parents is/was a bit unpolished and we did discover a few gaps in the rules, but overall it worked fairly well. I'm not really in a position to produce the thing (at least not right now) - owing largely to the fact that actually getting all the pieces printed/cut/laminated takes some time, effort and money. Also, the pieces of photographs i used to dress up the cards were obtained via a simple image search online. They've been chopped up and pretty heavily altered, but I don't own any rights to them. I could conceivably recreate all that myself, but it would involve taking my camera out to a course for a day (which is something I've not had a chance to do). If people are really interested, however, I *would* be willing to link the 300dpi jpgs i produced for each of the game pieces as well as the text document where i outline the rules as I've got them. You'd have to do some printing and cutting yourself (and dig up a few d6s), but you'd basically have the game for whatever that might cost you. The only thing I'd ask in return is that you pass back any mechanics improvements, house rules, or other supplemental ideas so that the overall project can improve through collective playtesting. ~PS