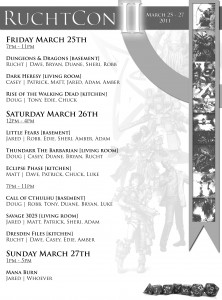 Well, another local gaming mini-con has come and gone.  This makes me a little sad, but it was a great time.

This particular gathering was, from the very outset, plagued with problems and difficulties, but overall I think we triumphed over them.  Overall.

Festivities began on friday night around 7pm with the first set of games.  Casey ran a session of Dark Heresy, Doug ran a zombie game called All Flesh Must Be Eaten, and Rucht was to be running an old school Dungeons & Dragons game - we're talking 1st edition here.  The first to games got started as planned, but Rucht was delayed for a while and so the rest of us played some board games while we waited for him.  When we finally did get started though, it was a lot of fun.

I spent all day Saturday running games.  In the afternoon slot I ran my session of Little Fears, which I think went very well.  Everyone seemed to have a lot of fun and there were definitely some memorable moments.  I think we're going to try to continue the game at some point so that they can finish the story they started.  During this time Doug was running his Thundarr game (using the Cartoon Action Hour system) and Matt was running his game of Eclipse Phase.

On saturday night I ran my Savage 3025 game.  This was basically a Savage Worlds game with a custom add-on for mech combat (which I've talked about here before).  The plot was good (at least, I think so), but we didn't get more than about 1/3 of the way into it - and not far enough for them to have encountered any real twists.  I am also not as familiar as I'd like to be with Savage Worlds (due mostly to lack of experience), so I there were times where I think I struggled with that, but overall I think it was a good game and everyone enjoyed it.  While we were doing that, Rucht was running his Dresden Files game (which I understand was hugely popular) and Doug was doing Call of Cthulhu.

I was slated to run a session of Mana Burn this afternoon, but some of us got to talking and I think everyone was getting pretty tired.  In any case, there didn't seem to be quite enough energy to start the game, so we opted to play a boardgame instead.  I may try to put together a one-shot of that sometime soonish.

Between slots there were also quite a few board games played - Revolution! (which Dave introducted us to), Invasion From Outer Space, Dominion, and others.

It was great to see everyone, and I think everyone had a great time.  I'd give a "special thanks to" list, but I think that would just amount to mentioning everyone.

We did miss those that couldn't make it - it would have been even better with them.  We were also glad to have a few unexpected additions though, so that was cool.