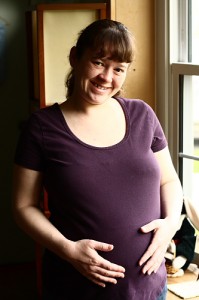 The State of the Penguin

Edit: New Photo.  The iPhone is nice, but it doesn't quite hold up to what I'm used to...

First off, we're getting close to Sheri's due-date - only about a month to go before the Bunguin's arrival.  We've been trying to get things ready as much as we can, but we don't exactly know what we're doing.  We *have* inherited a wide array of baby-related "stuff" from several friends and acquaintances - for which we are very thankful.  We also went to some child birth & infant care classes at the hospital, which were somewhat helpful and informative.

Second, I finally found a new job with a local company here in JC (I'm actually posting this on my lunch break).  Still doing web-work, though in a rather different context than before.  The position is temporary through June, after which time they'll decide whether to hire me on permanently.  It's good to have something again though.  Less stressful, especially with the munchkin coming.

Since RuchtCon, gaming has returned to its "normal" schedule.  My Sandstorm game has continued to progress nicely, and I'd say the PCs are on their way toward the resolution.  No word yet on how much longer it will go.  I'm developing thoughts on what to propose next.  Still working on several gaming projects.

I've taken a few more photos since I last mentioned it, but nothing amazing.  Still haven't posted a 2011 portfolio, but it'll come.

The weather here's been warming up as we head into spring, and my yard is already ridiculous.  I've mowed it something like 1.5 times - which is to say the front yard has been mowed at least twice, and I have waged a war with the forest in the backyard which is beginning to look favorable for my side.  I did grill out for the first time this year last sunday afternoon though.

Sheri & I watched something like 30 hours of LotR extras (all the bonus features on the 3 4-disc sets) over the course of the last few weeks.  Some pretty cool stuff in there - I recommend it to any fans.

Finally bought the Red vs. Blue: Recollection and looking forward to watching that with Llama and also listening to the commentaries sometime.  I also heard that Dead Gentlemen is going to be re-releasing The Gamers: Dorkness Rising - this time with commentaries (I actually asked them why the first dvd didn't have them and they told me that they ran out of space on the disc).  That would be cool.

I also picked up a new CD, but I think I'm going to make a more specific music related post soon, so I'll save my comments on that.

Ginger and William are in town even as I'm typing, and we've had a good time with them this week.  Also, Liam is fun - and he likes me. :)

I've continued to kick around some ideas for some writing projects.  I'll defer to voltaire (by way of Dan from Fear the Boot) for how this is progressing: the perfect is the enemy of the good.

Hmmmmm, when we get Thes to move down here, the profits from your game store will improve by 50%, so we need to make that a priority. Having Jerry and Amanda down here will help, too!

The balck hole known as JC will attract all who love gaming, music and our generally oddities as a collective mass. p.s. We have record breaking zombie tag.....