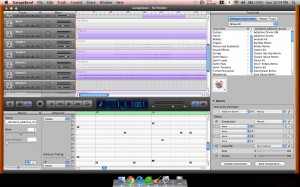 Like I mentioned before, I've been wanting to do some recording again, but am lacking some of the equipment i still need to open up shop.  So I've been doing the next best thing.

I dug up a few old recordings that I've made over the years, but for whatever reason never finished mixing.  Over the last few weeks, I've started working on them again - employing some new tools and techniques as well.

These aren't especially great songs, but they're ok and I've learned a bit playing with them some more.  I figured I'd post them here, but they're not enough to mark a real return of the Music page.

I have plans for that, however...

Edit: Something went awry in my exporting process.  I've remastered, exported and re-uploaded these songs. Turns out I'd forgotten to turn off GarageBand's "we assume you don't know what you're doing" feature...

Edit #2: I have remastered these songs yet again. A casual listen probably won't notice much difference, but they are now approaching the production level I'll be shooting for on future projects.