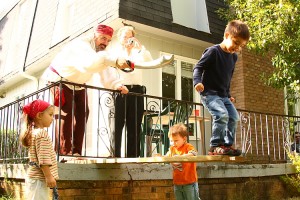 Except, you know, for the occasional screaming munchkin.

I guess not much noteworthy has been going on lately.  The blog seems to have slept through september.  Here are a few points of quasi-interest on hobbies, etc:

- I have noticed that I am currently involved in a ridiculous number of ongoing rpgs - 4, to be exact - and that my social life mostly centers around them at the moment.  I guess this isn't surprising considering that most of my friends *are* gamers.

- We started our Star Wars game ("Shards of Endor") about a week ago.  This is actually the first time I've run an ongoing campaign *not* set in a swords-and-sorcery style fantasy setting.  We've only had one playing session, but I think it's going quite well so far.

- Robb has (finally) started his Changling game, which I'm having a really good time with.  A really short time, but a good time.  Our monday-night sessions seem to be playing from about 7-9pm, which sometimes feels like quitting right after you get started.  I'm hoping our actual starting time can be pushed back to the theoretical 6 as we go on.  It's also got me thinking a bit about the future of my temporarily-suspended Mage game...

- On our sunday night games: Patrick's Star Wars game continues to be fun.  I've been really enjoying the short Dresden Files game Rucht has been running and I'm hoping to have a chance to do more with the Fate 3.0 system.  We're going to be starting Pathfinder later this month (when Dresden ends) - which will mark the first time I've played in a fantasy campaign in years.

- I've tried to do a little on the songwriting front, but haven't made it much further than jotting down a few vague concepts.

- I've spent some time fiddling around on my guitars too, but I'm feeling a little uninspired at the moment.

- I've been listening to MCR's Danger Days quite a bit lately - an album I was pretty skeptical about at first, but found that I really enjoyed after a couple of listens.  Also, Anberlin, The Decemberists and the two songs from the end credits of the Portal games having recently played the first to completion ("This was a triumph...").

- Most of my camera time has been spent pointed at Hannah, but that's probably to be expected.  She's 4 months old and exceptionally cute. :D  ...and we've recently learned she'll have some new playmates in a year or so.

- Sheri pointed out that I don't have any 2011 photos on my site here yet - maybe I'll put some up when I have a few minutes together.

- I did take some pictures at the picnic the company I now work for had in mid-september that turned out pretty good.  I think the people at the office have enjoyed them.

- And, of course, I also had fun taking pictures of the 2011 Talk Like A Pirate Party & Annual Nerf War.  Those always turn out...amusing.

Suuuuurrrrrre, YOU think the NERF war is fun. My abs hurt for a week and everyone picks on me!! -Drama Llama