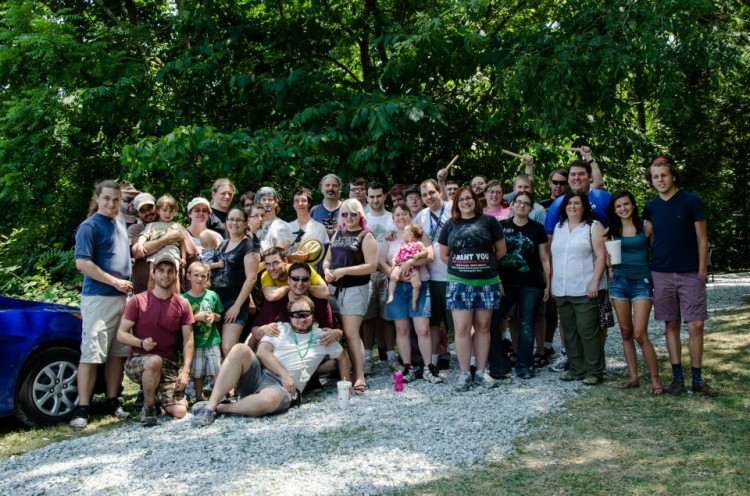 So, the 6th Annual Southeast Trogland Giant in the Playground Meetup was awesome.  Really awesome.  Thanks to Steven for the group photo here.

The last couple of years my own photography has been scaled back to only the "main event" at the ropes course - those pics turned out great as usual.  Actually shot quite a bit on full manual - using my 50mm prime at 1/200 or 1/250 and f2.8.  This year I also supplemented that documentation with some Twitter/Instagram posts as a bit of an almost-play-by-play of the weekends events.  That was fun.  Probably the only real "use" i've had for Twitter thus far.

We had a ton of people at our house on sunday.  Traditionally, we have had the sunday afternoon meetup-winddown at The Igloo (which is, in fact, an all-ages venue) - but many people head back to their home states/countries before noon.  This time, I think everyone stayed for this.  The count, at one point, I think was 33 people in our 1100 sq. ft. house (that doesn't have a what could be described as an "open plan").  This may not be the high water mark.  It was fun, but I think we were a bit overcrowded.  This is one of two or three reasons we're looking into non-residential facilities for more parts of the meetup - possibly conference rooms at local hotels or somesuch, if it could be arranged.

This year we had several pre-planned gaming events - and I kind of kicked off that idea by offering to run Little Fears for some people who had thought it sounded interesting last year.  By the time "sign ups" were concluded, I had 11 or 12 people who wanted to play.  The sessions I ran were completely awesome.  So many memorable moments and great in-character dialog.  I think my revised mechanics ("v1.5") worked very well, and even the character creation seemed to be pretty balanced.  Also, the "creepy" level was just about perfect - a creepy/horror game is a difficult thing to pull off.  The second session was especially successful.  Not that the first or third sessions were bad (they were really great, in fact), it's more that the second session in particular was more of a perfect storm.  It was probably one of the best sessions I've ever run.  All of the players in all of the sessions really got into it, and they played into the atmosphere and their characters perfectly.  They really made the games work.  They were awesome and I'm glad to have had the chance to run games for them.  Most gratifying, most of them even told me in so many words that they loved the games - and that is what I enjoy the most out of GMing: watching my players have a great time.

Like I mentioned before, I've been into some tangible bits for games. I got several comments on the character cards and handouts I made for this game, and I thought using crayons for them to write their names and also as their bennies/chips in the game was a nice touch as well (if i do say so myself).  Also, I liked using tokens for injury and fear in this game.  Overall, the mechanics had some pretty great physical representations.

On a quasi-related note, I've been discovering recently that I don't use game notes for much anymore.  I tend to write things down in my planning as an exercise such that I don't forget the key points and have a general impression of the specifics, but I really don't use the notes I write during the session.  The basic exception to this rule is to look up a name for a tertiary NPC.  Other than that, I go off of my memory and what the PCs are doing.  This wasn't always the case - I used to rely on my notes pretty heavily, but I think as I've gotten more animated and descriptive as a GM, I've started doing more of that flavor stuff (which is the fun) just off the top of my head (which is rooted in my understanding of the setting).  I think my games are better that way, really - for the same kinds of reasons that I don't like to roll dice as the GM: I don't have to stop the flow of the action and description to reference something external to the "story" as it is unfolding.

Getting ready to start a new game with my local group on saturday.  I think we're going to do an urban fantasy game using the World of Darkness rules.