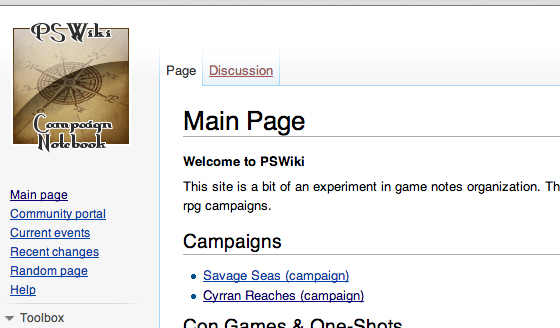 Web Dev, Gaming Cons, and the Wiki of the Penguin

I am pretty behind on doing anything on this site.  Meh.  I still need to post photos from 2012.  I've gone through them, I just need to make final selections & export them.  It'll happen.  At some point.

Also, i've been doing some work on the site engine and kicking around some new site design ideas.  Because that's what I do.

Also, also (and this is related) a group of us has started talking about this year's OotsCon, which is now called the Trogland Meetup.  It's becoming a bit more of a stand-alone entity.  We're expanding it a bit, due to past difficulties.  This year, we're going to have some hotel space for some of the events, and we're formalizing some of the other "goodies" - like con badges and 'schwag' items.  Due to this, we're implementing a registration fee as well, and I've been developing a registration site for us to use.  That's taken a bit of time.

So I got Sheri into Minecraft.  I'm actually kind of surprised she enjoys the game as much as she does.  Also, due to some hardware replacements at work, she got a new computer.  It's the fastest currently in the house.  64-bit Windows 7 2.9ghz with 8gb of ram.  This machine - dubbed Pheonix as it was born from the ashes of a few dying pcs - replaced Lain, and it plays the game quite well.

The Savage and Fantastic

We brought our Savage Seas game to a pausing point - actually, a point just before a new leg of the adventure - and decided to pick something else for a while.  It is a good game, and we'll go back to it eventually, but I was really in the mood to do something different.  The group had wanted to play a high fantasy game for a while, so I started a new D&D 3.5 game at 10th level.  The setting I'm developing for it is called Cyrran Reaches, and it's a region in the corner of a kingdom with half a dozen settlements and quite a few interesting characters.  So far, I've only really developed the generalities of the place and the westernmost village, but the detail is awesome.

Speaking of, I've been continuing my experiments in gaming notes.  I like to have gaming notes because I like highly-detailed setting creation, but I've never had a good way of organizing them such that it makes any sense.  I got a new idea while listening to Fear the Boot, and downloaded MediaWiki - which is the open source platform wikipedia is built on - and put it on a subdomain on this site for my personal use.  It is now my game note repository.  Since it's online, I can work on it from anywhere, and it's topical, internally-linked nature makes organizing things intuitive and effortless.  It is the best method I've come across so far, and I'm really loving it.

I'm now kicking around ideas for RuchtCon III coming up in mid/late march.  Due to Hannah, I think I'm only going to be able to participate a little, but I told Rucht I'd run one game, so I'm now gearing up for some Mouse Guard.