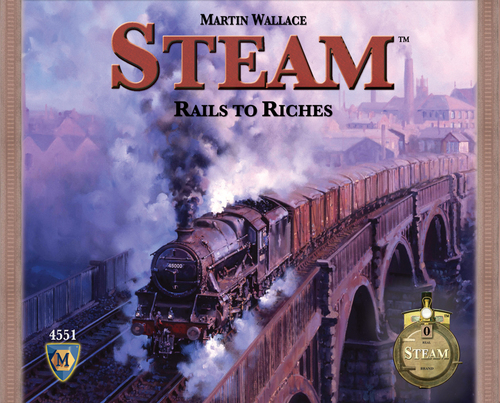 We (Tony, Sheri and I) played two new board games over the weekend.

The first game we played was Thunderstone.  This is a game that I heard about at GenCon in 2010.  It's a lot like Dominion in terms of game play.  It's a deck-building game where the goal is to accumulate cards that give you points at the end of the game.  The primary difference is in thematics.  Instead of accumulating coins to buy Provinces and other victory cards, in Thunderstone, you fill your deck with hero and weaponry cards that will help you defeat monsters, which are worth points at the end of the game.  We had a good time with it, though we didn't actually figure out how it worked until about halfway through.

The other game we played was Steam.  This was a game that I got Sheri for christmas, and we've only just now gotten around to playing.  This game is somewhat involved - we only played the "base" game - and we only mostly figured it out.  It is something like a cross between Ticket to Ride and Carcassonne.  Essentially, you lay track tiles to connect cities in order to move trade goods to and from cities to gain money and points.  We didn't get all the way through the game we started, but what we played was a lot of fun.

Thunderstone is fun, but Mrs. Turtle isn't that into it. She got me an expansion for x-mas, but since I figured a Dominion Expansion would actually get more play time I let her return it and she got Seaside. She also picked up Agricola which is really excellent. I probably will try to get the Numenera expansion for Thunderstone when it comes out. PS: are you guys all aware of the Torment: Tides of Numenera Kickstarter? It's a spiritual seqeul to Planscape: Torment.