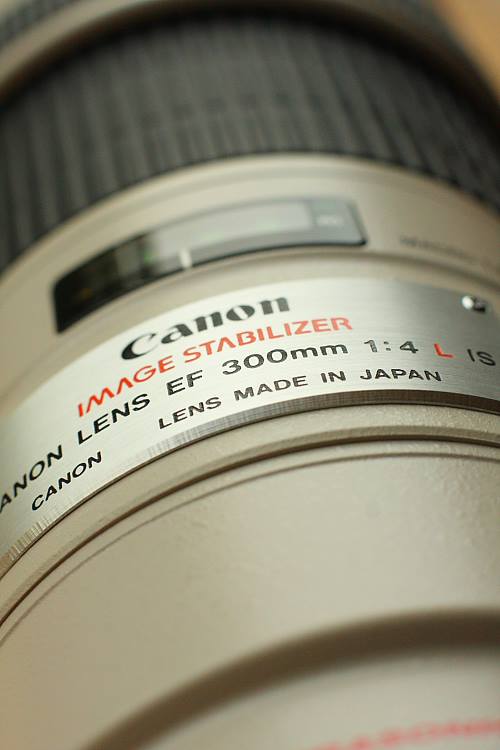 So, after saving for several years, I have, at last, been able to buy another piece of camera gear: a nice professional-grade telephoto lens.  Specifically, Canon's 300mm f/4L.  It is a beatiful lens, and so far my only "regret" is the fact that I haven't had more time to play with it.  The thing is built like a tank (and weighs a ton for it), crystal clear and gives a respectable reach.

Along with that, I also picked up a set extension tubes which are a lot of fun to use with my 50mm (though controlling the depth of field is tricky).

Prior to having bought that lens and running into the present, I've been looking at upgrading my faithful 40d camera body to something with some more expanded capabilties - particularly with respect to iso sensitivity & performance as I have found that flash tends to annoy people and I'm all too often wanting to shoot in rather dark situations.  Also looking at possibly (probably?) going full frame.

I've got a good chunk saved toward a new camera body/kit thanks to a web development side project, but, unfortunately, the camera gear I want doesn't exist.

Here is, basically, what I'm after:

- Solid construction (at least on par with my 40d)

- Convenient controls (again, at least on par with my 40d)

- A camera for which I can get a nice wide/ultrawide, preferably prime, lens

The Canon 5d Mark III meets all these requirements swimmingly.  It's a full frame, and probably the best digital camera Canon currently makes.  I have played with one of these, and it's undeniably awesome.  It's just so freaking expensive. So I suppose I should add "- cost < arm+leg" to the requirements.

The Canon 6d - also a full frame - has most of that for about $1500 less, making it somewhat more affordable.  No complaints on image quality (probably the most important thing), but it takes a couple of hits on the "controls" scale, missing some things my 40d has such as the thumb joystick and physical buttons for more controls on the top LCD.  I would miss those.  It also has a couple of other minor shortcomings, such as a 1/4000 max shutter speed, SD cards only (which seems to be an increasing trend), slower burst rate, and a few others.

The newly-announced Canon 70d is a more direct upgrade of my camera and is a crop-frame sensor, but I'm less sure on how its construction solidity compares to my 40d (i seem to remember thinking some of the later X0d models felt more "plastic-y" than mine) and it has the same controls shortcomings as the 6d, though a price tag about $800 less - its ~$1200 price tag making it almost "cheap" in the scheme of things.  I wouldn't really mind sticking with a crop-frame sensor (in fact, in some ways, I think i might prefer that), but I do eventually want a nice wide lens, and I'd really prefer a prime (such as the (pricey) Canon 14mm f/2.8L II) - though the relatively inexpensive and well-reviewed Canon 10-22mm may suffice.

The Canon 7d has the controls and features set I want - almost perfectly - though the ISO, image sensor and mp are all a (small) step down from the others.  Also a crop-frame, it is, at least as of now, about $500 more than the coming 70d.

You Get What You Pay For

...and, conversely, you pay for what you get.  The other issue here is that all of the above cameras have features I don't need and/or would never seriously use - most noteably among them: audio/video recording capability.  I'm a pretty serious still photographer, but I have absolutely no interest in video - at least, not in any capacity more than "look at this cute thing my daughter is doing", and I hardly need a thousand-dollar hd camera for that: I'm going for pure content, not quality.  I don't need that - nor do I understand why every new digital camera "must" have it.  Probably because it's a feature they can implement on a digital camera without too much trouble and still charge a premium for.

I don't need in-camera editing functions either.  And I don't need direct print.  Built-in wifi and/or gps are cool, but I don't need them.  Built-in HDR would be pretty sweet, but also, not needed.  The 70d's flip-out screen might be handy for self-portraits at christmas, but I'd wonder about it's solidity and I don't need it - and I definitely don't need its touch-screen (i'd rather have physical buttons, thanks). I don't need a pop-up flash.  I actually don't need custom camera modes, because i don't like the "reset" that happens when the camera goes to sleep.  Not to sound "elitist", but I don't need the amateur camera modes (actually, I'd be happy with only M - though Av and Tv might be nice on occassion) OR "scene" based modes.  I don't *need* full frame, though I wish Canon (or anybody?) made a nice wide/ultrawide equivalent (10mm f/2.8, EF-S perhaps?) prime for and APS-C cropped sensor.  There are a host of other, minor features on any given camera that could go as well.

So basically, what I want doesn't exist - and, at this point, is probably unlikely to.  The 6d is probably still the best fit, though if I could find a used 5dIII for a good price I might go with that.  A 6dII or 7dII might be as close as I'll get to perfect also.  A 5dIV might bring the price of the III down to reasonable (assuming I don't decide I "need" some feature of the newer model).

It's down the road a ways anyway, but, as of now, only know I'd like a camera upgrade.  I have no idea what I'd actually buy.

Edit: Some rumours I've read suggest that Canon may be releasing some new cameras next year (including a 7d mk II) - maybe one of them will be closer.