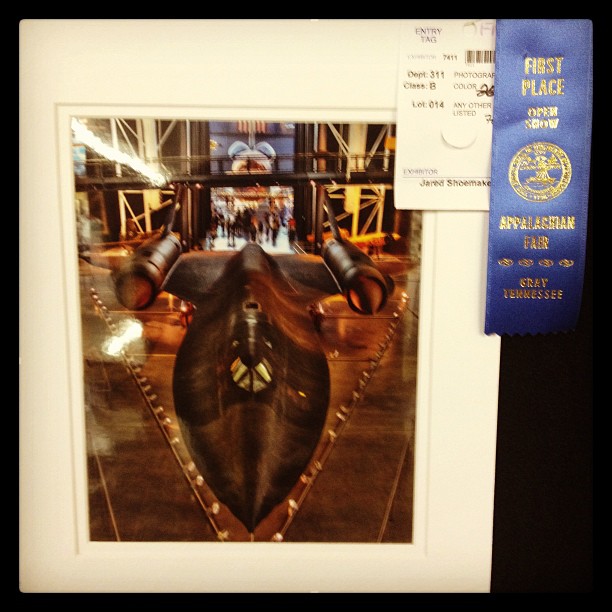 Since I've spent a few years taking pictures of pretty much everything I encounter *and* since I've spent quite a bit of money on this hobby over the last 5 years or so (and plan to spend a bit more), Sheri told me she would like to see me "do" something with this stuff.  By that I suppose she meant "do something more than just share them with your friends".  Or something.

So anyway, at her prompting, I entered a few of my shots in the Appalachian Fair.

First off, their website needs some help.  It's a bit..."dated".  Or, some might say, "in need of a redesign".  Or, others might say simply, "ugly".  That really wasn't my beef with it, though.  My issue was that their website failed to communicate clearly.  It did convey the necessary information, but there were times it seemed to be contradicting itself with respect to deadlines, and it could have been a little more specific on a few steps.  I got the distinct impression - from both the site and personal interations - that the fair just seems to assume you already know what's going on.  If you're involved with this, you probably have been for some time and so we don't need to be overly specific.  And, on the off chance you're new, they'll just let you muddle through the affair without offering much direction (or even confirmation) along the way.

I entered 4 photos in the photography section at the fair.  That was an interesting day.  I'd actually started out to enter 6, but one of them didn't turn out as sharp as I would have liked, and I could only find 4 acceptable mats at Michaels.  I might have waited till the last minute on that one, but we've had a busy summer.  That fact might have contributed to feeling of "lack of direction" i expressed above, but I would still maintain that's not all of the cause.  But I digress.

The four photos I entered were one of a tropical bird (animals), a path leading to a beach (landscape), a butterfly on a flower (insects), and finally, a photo of the SR-71 Blackbird we saw recently at Udvar-Hazy (other).

So last night, we all went out to the fair.  And yes, I still find "carnival barkers" annoying.  Not that I was going to play any of their games anyway (I'm not especially good at them), but yelling at me actually makes me less likely to bite.  I wonder if that actually works on people, or if it is, at this point, simply a cultural artifact.  Perhaps other people like it specifically for that reason.  But I digress, yet again.

We knew Hannah would want to see the animals.  She was extremely amused by the duck slide, and I think she enjoyed petting some of the others.  She also told me she wanted to pet the person in the cow costume.  She had a good time.  In the next couple of years, she's going to start demanding to go on the rides though, and then I'll be less into it.

Apart from witnessing the adorable, I was primarily there for the photo exhibit.  We haven't really been to a fair since I've been into that sort of thing, and I really like to see others' work - both to mentally critique and to learn something from their styles.  Also, I thought it would be cool to see if I'd happened to win anything, and how much I agreed with the judges.

There were a lot of cool photos there.  The exhibit wasn't huge (and was laid out a bit awkwardly for someone trying to see all of it), but it was of a respectable size. From what I saw, I was proud of my shots.  Honestly, I do think they were among the best, though there were more than a few I'd call better, and those were very enjoyable to look at.

The first place "animals" photo was of a squirrel clinging to the side of a tree, poised not unlike a ninja, staring straight at the camera.  It was a good shot, framed well,  though perhaps not razor sharp.  It had an interestingly-narrow depth-of-field as well.  I didn't begrudge that one - it was as least as good as mine.  The second-place, however, I was less impressed by.  It was a female cardinal on a snowy branch.  It was rather small in the frame, as the bird was only about an inch tall on the 8x10.  The snowy environment was interesting and did add to the composition, however, so the small subject was, perhaps, acceptable (if not my style).  There was some rather odd intentional vignetting around the entire frame, which looked like it was trying too hard to be "quaint".  Apart from the fact that I think the shooter needed about another 100-200 mm of focal length, it just wasn't very sharp.  It was a bit blurry even from a distance, and the contrast was a bit dull.  It wasn't a terrible shot, but I didn't think it was as good as mine - or another I saw, which was a rather impressive shot of a barn owl.  The third place shot was considerably better, it was of a heron skipping across some shallow water.  Taken from an angle about 90 degrees to the left, it would have been amazing.  As it was, it was pretty impressive.  I wouldn't have begrudged it second place.

The first place "insects" photo was a butterfly as well, nicely composed, though not very bright.  I think it was as good as mine or better, and the variety of butterfly was a bit less common, which added interest.  The second place insects was of a banana spider.  It was decent, though the angle of the shot and its position in the frame could have been better.  The color and contrast were great.  Sharpness was good, though the abdomen was notable sharper than its head (which was facing away).  I suppose it was superior to mine in terms of contrast between subject and background and, arguably, interest of the subject - but I think my shot was as good or better in any other aspect.  Third place was a dragonfly.  It was also a good shot, though there was another dragonfly photo in the show I actually thought was better in terms of sharpness/color/contrast, and they were framed about the same.  I didn't compare them side-by-side, however, so maybe there was something technically superior to the winner.

As an aside, they hung my butterfly picture incorrectly - vertically instead of horizontally.  I don't mention this because I think it had anything at all to do with how it was judged (it actually looks fine vertically), but because I find it amusing since the woman I gave my photos to specifically asked how that one was intended to be hung.

So, landscapes.  I don't remember the first place landscape - though all of the first place shots were good, so I'm sure it was awesome.  The second place shot was of a mountain valley filled with rocks and scrub, with a nice blue sky.  It wasn't especially interesting in my opinion, but it was technically quite good, and I'd say it deserved second.  The beach path photo I entered isn't one I think is technically perfect: it's less than sharp in some places, a bit oversaturated and without enough contrast, but it's a shot I really like for some reason.  I don't recall the third place landscape, but I'm sure it was good.  I didn't really compare the winners with mine in this category since, though I really like my shot, I wasn't prepared to defend its technical merits against the others.

And then there was the Blackbird, for which I actually got 1st place in the "other" category.  Ironically, I wouldn't have given it to me.  The second place shot in that category was of a train moving down a track, puffing smoke with some people off to the left, waving.  Interestingly muted colors.  I think it was actually a better shot, and I probably would have given it first place and second to my plane (i don't recall seeing anything else in that category that amazed me).  Of the four I entered, it was probably my least favorite.  It was a good photo and all, and it was an interesting subject, but I liked the others more.

In general, I only agreed with the judges about 50% - but that's the nature of anything artistic, right?  Also, I think my criteria were probably different.

One thing I learned from this whole experience, is that I don't like prints.  At least not 8x10s  All of my photos I consider "good" are framed well as a whole.  Forced to chop off an inch and a half from the longest side, however, and some of them become... less perfect.  (Just for the record, I highly doubt this affected the judging of the photos I entered - this is a separate topic).  I've found that I don't shoot for this sort of cropping, and I don't particularly like it.  If I'm going to do more for prints, I may need to adjust my shooting method, perhaps shooting for what I want and then, if I think it's something I might want a print of, recompsing it with the cropping in mind.  Or something like that.