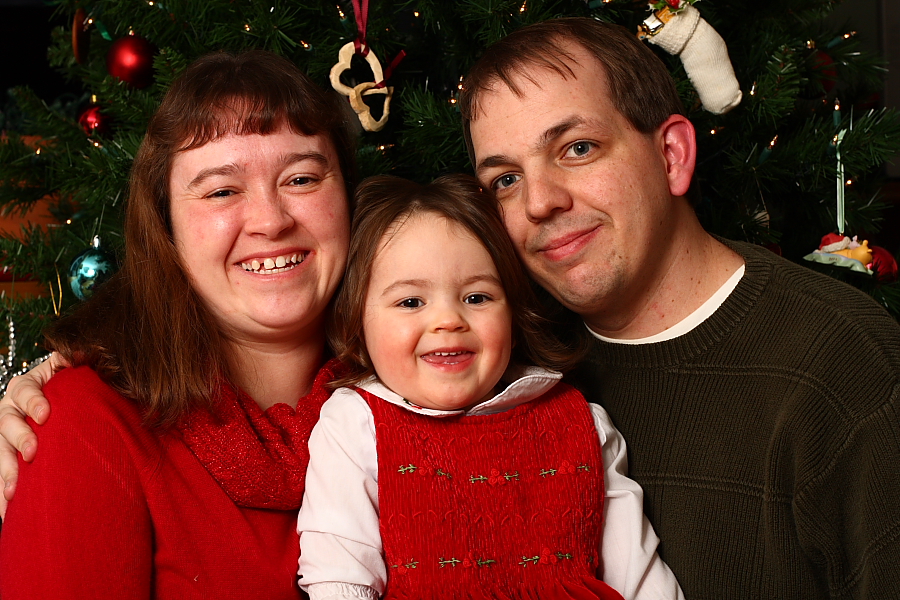 Sum of the New Year

2013 Family Christmas Photo.  Camera controlled from laptop, laptop controlled from cell phone.  Hannah controlled: barely.  Flash bounced from left off a piece of foam board on a music stand.

Ah, the new year.  2014 happens.  Looks like Penguinsushi.com is almost 9 years old.  Over Christmas I, once again, made the journey northward toward parentville.  Unquestionably a great time.  Tons of pictures on the Bookface (for those of you who find me there).

I finally was able to meet Tony Vasquez, my friend Brittany's husband, who happens to be a pro photographer.  We had a great time talking.  He gave me a few tips on flash photography/lighting and post-production, and I was somewhat gratified that, during the course of the conversation, I actually did feel like I knew what I was talking about.  Since I've been back, some mention has been made of us going out and shooting together next time I'm up that way - which would be completely awesome.

Christmas was also pretty good to my camera fund.  In theory, I think I have very nearly enough for my next purchase (though that's going to wait at least a while for a small myriad of reasons).  I'm still not sure what, exactly, I want to go with.  It's down to either an updated camera body, or a nice wide-angle lens.  Unfortunately, a perfect candidate for either of those doesn't exist at the moment - though there are rumours of developments throughout this year.  As of now, I'm planning to rent Canon's 14mm F2.8 L II later this spring to try it out.  I figured if I'm considering spending that kind of money, I want to be absolutely sure it's what I want.

So dad & I went out 2 and half times over the holiday.  Seems he had a lot of fun over thranksgiving, and wanted to do some more.  I say "and a half" because there was one time that we both went out, just not together.  On new year's eve we went out to a trail near Lake Monroe and hit 10.  Overall, we were 13 for 16.  Looking at the logs, a couple of our DNFs seem as though they, perhaps, weren't even present.   I've now found more caches in IN than TN (a condition my good friend the Llama wishes to rectify).

So Tony/Llama and I have been thinking about placing our own cache somewhere around here.  I've found some promising containers for "not-too-expensive", and been thinking about possible sites.  I, personally, am more a fan of the caches that are in parks, along trails, etc.  We still need to scout the locations, though getting permission to actually place one might be difficult.  Can't put my finger on why, but I get the general impression standards/restrictions may have become tighter in the last 5-10 years.

And A Happy New Game

Our Cyrran Reaches game wrapped up a chapter in mid-December, and it left off with 4 or 5 possible directions in which to proceed.  It has been a fantastic game, and we're planning to keep rolling with it...

...just not immediately.  See, we've been playing that game for almost a year now, and I find that too much longer than that and I start to get burned out.  I'm loving that game, but I also like variety.  We kicked a couple of ideas around and decided that we're going set up a brief interlude game: something different to play with for a few sessions before we get back to the "main event".

We've done a lot of fantasy, so I'm planning to run a short sci-fi game for the group.  I've just actually ordered the Fate stuff I'd been wanting to pick up (I'd been planning to buy it ever since I downloaded the Pay-What-You-Want pdf and ran a game at Trogland 7), and I'm looking forward to playing some more with that.  I was talking to Sheri last night about the setting I have in mind, and she seemed pretty interested.