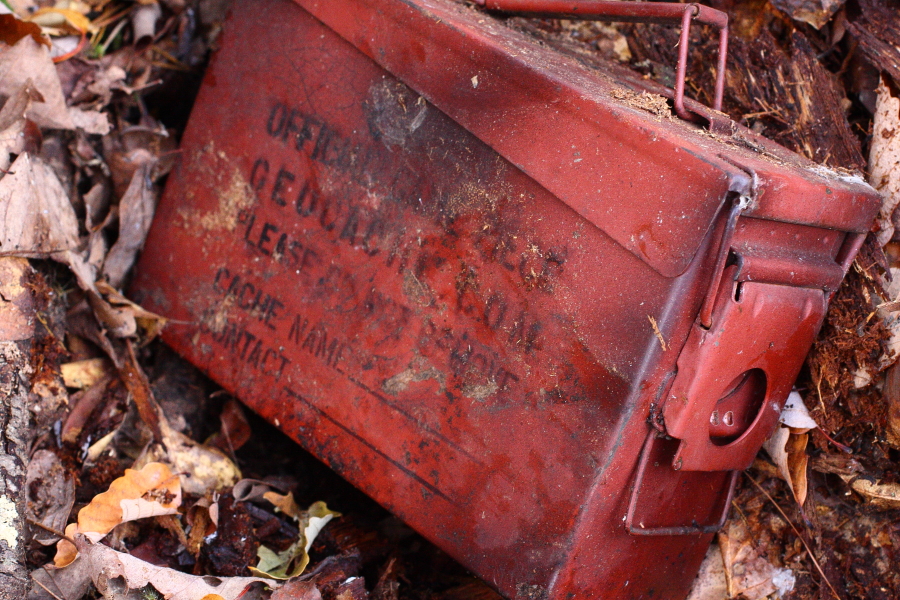 Cache at the top of the mountain.

Went out hiking/caching for the first time in a while yesterday.  My usual cohorts weren't able to make it, but fortunately Robb joined me for what was probably the most arduous adventure so far.  Seriously.  The ascent was brutal, and some of the descent amounted to something I would call "leaf skiing".  We were 5 for 5 though, and I found an unactivated travel bug in the ammo box at the top.

So I've been doing this for just over a year now, and I've had some pretty great adventures with Tony, Tim, Robb, and my dad.  Think I'll probably keep it up.  I'll probably "upgrade" to a "premium" membership sometime soon.  Tony has already.  The premium membership gives you access to "premium members only" caches.  This originally struck me as unnecessarily elitist, but I've since heard at least one compelling argument for this practice: anti-theft.  Especially when the containers are nice, if the cache is easily accessible to anyone on the internet for free, it seems that they have a tendency to go missing with greater frequency.

My D&D game continues to go well.  In fact, those have been the only entries here on the site for a while.  Not all of the sessions have been awesome, but in general, the momentum continues, and I'm still enjoying it - which is good, because there's a lot of it left.  I've been kicking around several other campaign ideas (like I always do), but none of them have manifested the "new shiny" effect where I want to drop the current game to pursue one of them.

Steve has now joined us for a few sessions via Skype.  I've decided that that works "ok".  One of the minor problems is that the built-in laptop speakers don't have enough power to amplify Steve enough to compete with the table (read: Me and Tim) and I don't have a good speaker to use yet.  I'm wanting to get a decent bluetooth speaker anyway; just haven't gotten around to it yet.

The bigger hurdle for me is more inherent to remote play, though.  During the course of a game I'm observing the table and trying to make minor adjustments to how I present aspects of the game based on what I see.  It's a bit difficult to read body language through a computer screen, particularly when, due to camera placement, you don't even get eye-contact.  I guess this is to say "hopefully its working out well", since I can't necessarily tell.

So Canon's long-awaited 7D mk II has begun shipping, and I continue to read good things about it.  This will probably be my camera upgrade of choice.  Don't know when I'll be able to do that, though.  I've still got a wide angle lens and some stuff for off-camera flash on my wishlist, too.

Clearly you need more people connected via Skype to figure out what works best!

Heh. Still group-less up there, man? Or is it just that "time" is the issue? Can you connect multiple people at the same time via skype? With video? Or is there a better service that can? Preferably, more efficiently? Actually, the biggest problem is probably our comparatively-slow DSL connection... ~PS