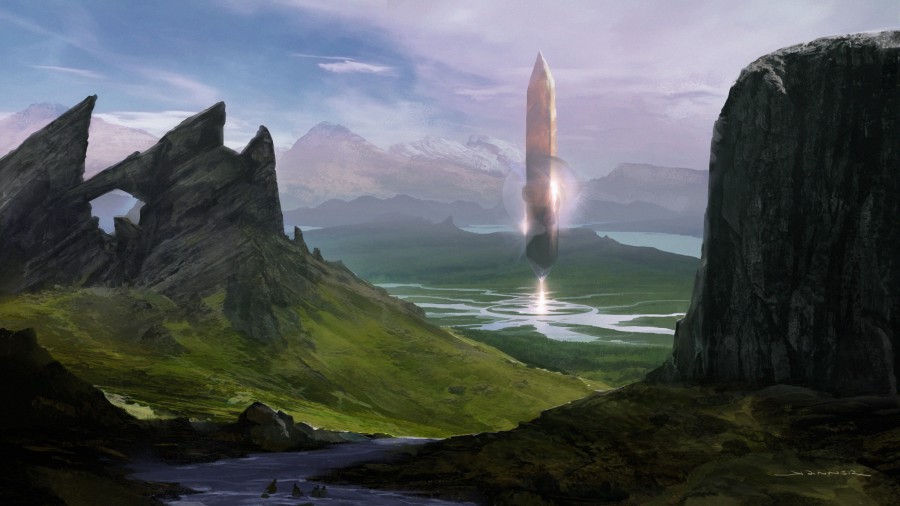 I really want to run this game.  Yes, I know.

I have been fascinated by Numenera since my first encounter with it over a year ago.  I don't know that it's a "perfect" game for me (such a thing probably doesn't exist), but it might be very close.  The setting is fascinating and unique, borrowing from science and sci-fi as well as fantasy in a way that doesn't feel like a clumsy genre-mash.  It also has some of my favorite tropes built-in in an inherent way - I always love worlds with forgotten histories, and I love how exploration and discovery are main themes.  There is even a solid, in-world explanation for "adventuring" as an occupation.  The real genius of the Ninth World as a science-fantasy setting is that it can contain pretty much anything and yet still make sense. The rules system for the game is simple enough to be straight-forward, but sophisticated enough to be interesting - and has a uniqueness itself.  Plus the artwork in pretty awesome.

So, instead of re-ordering the Mouse Guard book I returned (and with some additional cash I was given for my birthday/christmas), I have added a few more books to my Numenera collection.  I usually don't buy additional/supplement material for games these days - sticking to core-only and letting my imagination do the rest - but I found myself making an exception for this game for two reasons:

- First, because this game has totally captured my imagination.  So, good job, Monte Cook Games.

- Secondly, because the setting is so unique, I think some additional material might actually be necessary as I try to wrap my head around how the Ninth World actually works enough to run it.  I've looked through the Ninth World Guidebook, the Technology Compendium, and the Ninth World Bestiary a fair bit since I got them, and they've been helpful.  Also, I've been pretty impressed with them as creative products.  The books' mechanical aspects are pretty simple and straightforward, and the overall foci of them seem to be more on flavor and feel than on mechanics and rules.  This is always a win where I'm concerned - expanded world/setting material is always my favorite part of any RPG supplement.  I've found quite a few interesting ideas to use so far, along with some ideas borrowed from other sources to supplement my own material.

I'm looking to start a Numenera game after our current World of Darkness campaign reaches some resolution.  I'm loving the WoD game, but I also can't wait for this one.  Yes, I know.  I got the core book for Christmas last year and I still haven't had a chance to run it, much to my chagrin.  Now, however, I'm a bit more prepared.

...and now, with the previous post, my brain is considering the Mouse Guard Territories 1 billion years in the future.  So that's odd.