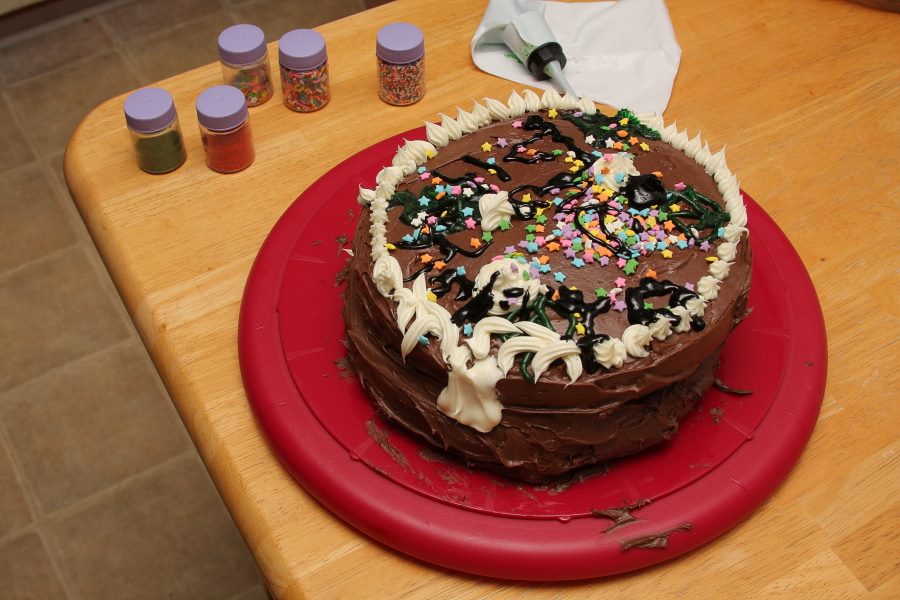 That Time We Made A Cake For A D&D Session

This was a first for us.

I'm part of two regular gaming groups: one I run, and one I play in.  It's nice to be able to do both.  Our friend Rucht runs the group I play in, and right now he's runing a 5e D&D game.  On a side note, 5th Edition seems to be a solid system.  I like how they've simplified and streamlined the system but kept it feeling very much like Dungeons and Dragons.

In this game, Tony is playing a halfling barbarian.  Edie's character, his sister, was trying to help with his "anger issues".  They decided to try cake decorating as therapy.  This did not go well.

The really hilarious thing was that Tony's dice knew exactly how well a halfling barbarian should be able to decorate a cake, and out of 4 or 5 rolls, I don't think he rolled higher than a 5.  The whole session was hilarious, I don't think I've laughed that hard during a game for a long time.  The die rolling, the RP, the descriptions of everything that was happening - even when the bakery was attacked by monsters - everything was cracking us up.

Then Tony got an idea: we should make a cake, decorated as badly as possible, and bring it for Rucht at the next game - down to the black-icing (mostly illegible) "this sucks" Tony said his barbarian wrote on it.