Easing into the Holidays

The holidays are fast approaching, but this year hasn't become as hectic (yet) as years past.

We have our vacation time planned out now - we'll be gone to the IN/OH area from the afternoon of the 20th through the 28th. We'll get to go to christmas parties on both sides of my extended family this year, which will be cool. Still need to finalize some details - like when to meet up with some people and who might be able to take care of Ally.

Other stuff (in no real order):

The Social Theory class I had been sitting in on came to a close, which is kinda sad. I was enjoying that. Dr. Beck took us out for lunch on Dec 1st - this was a reward for the class's good grades and they invited me to come along for fun. I brought them cookies on the last day of class. They were a little abnormal in terms of shape & consistency, but tasty.

Our friend Steve has moved back into the area, and it's been fun trying to catch up with him a bit. We've been talking a bit about music & recording and he wants to get back into a little tabletop gaming too. I've set part of my recording 'studio' up and have been playing a bit with Addictive Drums and AmpliTube. I've been looking at electronic drum kits again too.

We're planning what should be a fun new-years-eve party at the Hippie Hut Mk. II, though we are very sad that our EP & co. will not be able to make it. :(

Yesterday was Sheri's birthday. We went to the crazy tomato and then to best buy to buy a movie. We ended up getting Evangelion:1.01 - the first of 4 feature-length movies which are to be a retelling of the Neon Genesis Evangelion anime series. It was pretty faithful to the original. On the downside, I doubt the next one will come out before next christmas.
Also, for one of her birthday presents, I got her Super Mario Wii, which she was very excited about. :) We played a couple levels of that too - it's hugely entertaining.

Still haven't got to playtest my new roleplaying system, but hopefully soon. 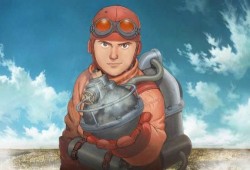 So yesterday was Halloween, and as of about noon, we had no plans at all. See, we have a costume party for a friend's birthday *tonight*, so dressing up might have seemed a little redundant (plus, I would have wanted to save my costume anyway). There were several things we could have done, but not really grabbed our interest.

Still, it didn't seem right not to hang out with one's friends on the 'Ween, so we decided we'd get together & do...something. It ended up like quite a few of our weekends, but that's not a bad thing. We went out to eat at Cootie Browns, headed over to Mr. K's to see if anything looked interesting, and then went back to Nick's place to watch a movie.

Our cinematic choices for the evening were a horror movie called The Descent and an anime called Steamboy. Despite the fact that it *was* Halloween and one can make a strong case for the watching of scary movies on Halloween, we decided to watch Steamboy. Ginger & Sheri aren't overly fond of scary movies on the whole, and decided I'd rather watch the anime as well, so, despite some attempts to count a vote for Abby, I think it was decided our way 3-2.

I think I give Steamboy about 3.5 stars. It was quite beautifully drawn, and the camera-effects emulation (sweeps & pans, etc) looked really cool. The story was interesting (if not overly deep) and I liked the fact that most of the movie kept you unclear as to who were the 'good guys' and who were the 'bad guys'. Also, it was about the most steampunk anime I've ever seen, and we've been conversing a fair bit out steampunk recently.

Still, it had some typical anime flaws. Character development was a little shallow (not surprising as it usually takes a series about 12 episodes to established a character). Also as Nick pointed out, a couple of the characters had more than their fair share of monologues - often in their own static timestreams (ala "hurry up get out of here! - but let me give a 15 minute soliloquy first!"). A couple of the more villainous characters seemed to pop in and out - seeming very important in some short scenes, but completely insignificant (and absent) for the bulk of the movie. And, perhaps the most typical aspect: exceptionally bizarre and wildly inaccurate interpretations of thermodynamics. But those are *fun* and hey, it's a movie.

So while we did enjoy poking fun at it, I still enjoyed the movie for what it was. 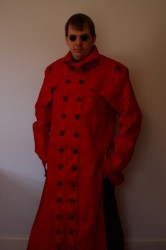 Here's what happens when you have friends like mine. They buy you awesome costumes, and then they want you to wear them and take pictures of it.

Apparently one of my friends found this replica of Vash the Stampede's coat on ebay, decided it must be mine, and gave it to me for christmas. It is pretty awesome. Whoever made it did a great job. It's pretty darn accurate from what I can tell too. I don't have the actual glasses, so I had to improvise for the photo (it didn't look right with no glasses). Still, looks pretty good.

I guess with costumes this cool, I feel it's about the least I can do to oblige their demands of photos. Plus, it's another excuse to play with my camera. I think took about 8 pictures. I thought this was the best one.

It really is a nice coat. I've thought about modding it slightly (by maybe adding a few details and/or maybe a partial lining) and actually wearing it places - but then i remember i generally don't like people staring at me. Plus, they'd probably think my strangeness + bulky coat makes me a terrorist or something. Then they'd Google me and find out i'm wanted for sixty billion (double) dollars. It's just all down hill from there...


Some of you may remember the penguin costume. That one I actually wore to a costume party. There's some pictures of that floating around somewhere. It was pretty spectacular too. I had thought about dressing the penguin up as something (that'd be two costumes at once!), but I think Vash the StamPenguin is too surreal even for me...