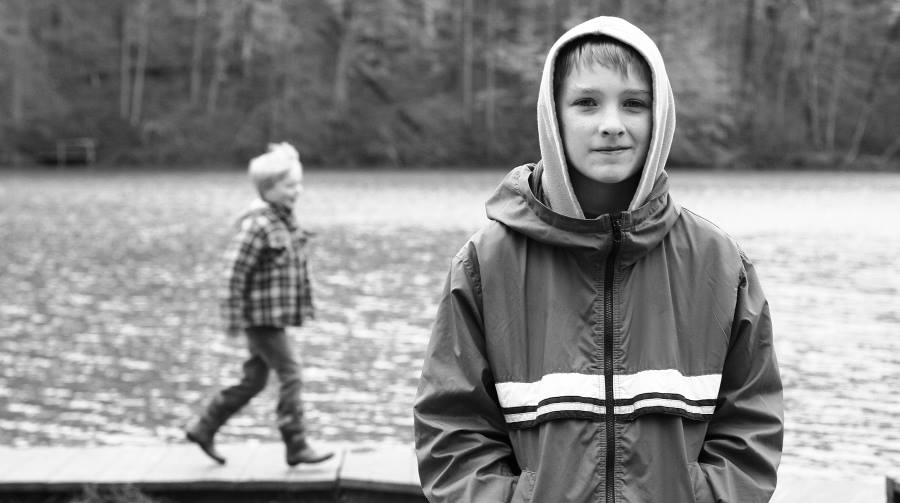 Had a great Christmas this year in IN with my parents.  Bunguins #1 and #2 both handled the trip car pretty well, and everyone loved getting to see them.

I got to do pretty much everything I was looking forward to with my family, which was a lot of fun.  Didn't make it to the new Star Wars movie, but that was pretty low on the list, really.  Spent a lot of time relaxing, enjoying Christmas festivities, reading, playing cards, playing wii golf (Tiger Woods '10) on my parents' projector, and geocaching.

Spending time with family - Mom, Dad, Joe, Jame and my Uncle Dave & Aunt Roxie was great.  Wish I saw them all more often.  I got to catch up with my friend Justin, too - first when we introduced him and his two older boys to geocaching (seen above), and then on New Years Eve wherein we changed an alternator and played Settlers of Catan.  More surprisingly, I got to chat with another old friend, Scott, for a while at church last sunday, too.  We did miss my sister and brother-in-law this year, but they were off having fun with his family.

All in all, it was a great trip.

I actually read quite a bit over the break.  Tony gave me the Welcome to Night Vale novel for my birthday and Sheri got me Randall Munroe's What If? book for Christmas - and I read all of both of them (and recommend to any like-minded oddballs).  I wished I'd brought the Battletech book I'd been reading as well.  I normally don't read that much (at least from non-gaming/non-reference books), but something about the relaxing week seemed to be conducive.

The Welcome to Night Vale book is pretty good - it does a good job of preserving the feel of the podcast.  I did find myself reading sections of it in radio host Cecil's voice/cadence.  Actually, I think that particular affectation enters my own speech patterns in certain circumstances if I've been listening to it a lot.

What If? is also great.  I started reading the articles on the website quite a while back, and they're all fantastic.  There are quite a few in the book that aren't on the site, too - though there are many more on the site that couldn't fit in the book.  A few of my favorites accessible here are Drain the Oceans, Into The Sun, and Interplanetary Cessna.  And also, many, many, more.

for the last few weeks or so, i've had the intense urge to write a new song, but everytime i sit down to work on one, i can't come up with anything. This is a relatively rare instance of motivation outweighing inspiration - usually the opposite is more true.

i've also been kinda sick for the last few days. I'm taking a medicine that says i should 'avoid excessive or prolonged exposure to direct sunlight or artificial (?) sunlight'. I'm worried that it's trying to make me into a vampire or something. I wonder if that's a side effect of the medication too...

since i've been sick i've finally finished reading 'The Hitchhiker's Guide to the Galaxy' - a very ironic book read very ironically since i only seem to find the time to read completely enjoyable books when in situations in which i cannot completely enjoy them. Douglas Adams would be proud.

a night of relative insanity

Here was the evening, as it happened:

Being that it was an off-week for gaming, sheri and i had no real plans for yesterday evening. It also just so happened that this morning at midnight was when Harry Potter & the Half-Blood Prince was supposed to be released and sheri had reserved a copy at Barnes & Noble a few months earlier. In light of these two coincidental facts, we decided to do pretty much everything we could.

First, we went to walmart because sheri needed to get a perscription before the pharmacy closed. we were in there for a while getting a few other things she wanted, but we tried to hurry. walmart is not all that much fun. I did notice that walmart has started carrying mp3 players like ipods and creative zen's. I have decided this is cool. I want one.

Anyway, by the time we were finished there and got to the entrance we noticed something we had failed to account for: it was raining. hard. i don't mean this sprinkling stuff it tends to do in TN, i mean it was raining. We decided to make a dash for it rather than waiting around for it to stop like the 73 other people standing there. Being that we were parked in tim-buck-seven, we were COMPLETELY drenched by the time we got to the car. There was about an inch of standing water in the sloped parking lot. Once in the car, sheri was trying very hard to be mad at the fact that her shoes were now soaking wet, but couldn't managed to look at me (and the water dripping from my forehead and down my nose) without laughing. I, personally, thought the whole thing was hilarious.

From there we drove over to Dice, our favorite game store. Dice has been having a sale in july with everything (except some ultra-new stuff) being 25% off. We had decided that it had been a while since we'd got a game and, since our anniversary is coming up (hard to believe), we thought it would be ok to use that as an excuse to spend some money on some games. As everyone knows, the First Anniversary is the Board Game Anniversary. We ended up getting the next expansion for Carcassonne and also decided to get another game we had actually played there before: Ticket to Ride (Europe). We also talked to Charlotte (one of the store managers) for a little while...she recognizes us as 'regulars'.

From there, we went to get haircuts. This had the combined advantages of making our very wet and now unruly hair look nicer before going out to eat, and actually getting our hair cut, as we both needed it at least a little. We were the absolute last people there and, as they cut our hair, both of the ladies were remarking to us and to each other about how long and arduous the day had been and how hungry they were. At one point, the lady cutting my hair actually apologized, and told me she had to stop for a second to go get a cracker because she was starving - which she did. This struck me as hilarious.

Once our hair was reasonably shortened and we wished the ladies good luck recovering from their day, we proceeded to Cracker Barrel. We specifically chose to go to Cracker Barrel because we had some gift certificates for it. We had a nice dinner that didn't cost us anything...and, when we were done, there was 11 cents left on the gift card.

We made our way from there, at last, to Barnes & Noble and the release party. Given how horribly small the b&n parking lot is, and how crowded it is EVERY friday, i was only marginally surprised when there was absolutely NO PLACE to park anywhere in that plaza. We ended up parking at another little plaza that was across the street and a bridge from the destination. It was a nice evening though. We actually met, by coincidence, another woman heading to the same place but coming from a slighly different direction. As we all cut through the grass on a median and proceeded through the parking lot, a small white car pulled into an empty parking place right in front of us. "Figures" said the the woman in a somewhat amused yet slightly exasperated voice. We had a brief chat about how it was a nice evening and how there was NO EARTHLY WAY that that parking space would have been there if either of us had been driving by.

The book store was, as was expected, completely packed to the gills (i didn't exactly know book stores had gills - nor a reason to breath underwater, but it's just an expression anyway). It was kind of amusing/annoying in that there were so many fans of the books (on a level that seems obsessive) in such a relatively small place. I.e., people in costumes, carrying wands, talking about 'muggles', etc. There were some games that were going on for the young kids - things about being sorted or catching Sirius Black or some such. Most of the people i saw there, however, were adults or kids at least high school age. I took up my standard place in the d&d aisle and started leafing through a book or two that i haven't wanted to spend the money to buy. I was amused to hear at least 3 people comment, as they walked by, about how 'dorky' things like LOTR, D&D and/or fantasy and science fiction in general were - as they were dressed in full costume. It totally blows my mind how someone could like Harry Potter that much, and yet so strongly dislike things that, in my mind (as i like all of them), are so similar. This further confirms my belief that a good deal of HP is fad based, and a good deal of the dislike for d&d, science fiction and fantasy is based on the similar idea of what is 'cool' or 'uncool'. That, and the fact that i think everyone i heard say that was junior high or high school aged.

I started reading the Hitchhiker's Guide to the Galaxy while i waited for it to be midnight, and then for the first 225 people to go through. Surprisingly, it only took about 40 minutes for us to get checked out.

Having accomplished everything we set out to do, we headed home with our new stuff and some interesting memories.