- The patrol spent a few of days at the Sunflower Inn and providing lookouts and support for the spring foragers around Ivydale, encountering a belligerent groundhog and some gathering crows.

- After a few days the grain shipment to Elmoss was ready to depart and the group began its escort to their next stop.  On the second day, they came upon a washed-out bridge that would have to be repaired before they could continue.  While out cutting small saplings for support structures, Clove spotted a water snake closing on the mice's position...

- After speaking to a few mice in town, the patrol set off into the foraging grounds to find the errant mice - two children, Kenley and Todd, belonging to a mouse called Bellatine.

- After talking with a few mice and following tracks some distance along the river away from the grounds where the other foragers had been, they determined that one of the mice must have fallen into the water and been washed downstream.

- The group found them camped under a rock overhang just as a young raccoon was closing in.  Hakett managed to get the beasts attention and led it on a chase away from the others while Nip & Clove prepared to move the freezing children to a new location where they could make a larger fire - this was complicated by the fact that the older mouse, Kenley, appeared to have sustained a concussion and they were not able to rouse her to consciousness.

- The following morning, the mice returned to Ivydale and delivered the unconscious mouse to the local healer.  They touched base again with constable Tanner, the mayormouse Melta, and Ranleff, the quartermaster in charge of the grainstores.

- The most pressing needs in Ivydale were to get the wall repaired where it had been smashed by a fallen branch, to make sure the mice foraging in the field were safe - especially after some tracks were found - and to escort the first spring shipment of grain from their winter store down to Elmoss.

Having been unable to run my normal, in-person games for some time, and with things looking more and more like it'll be a while before I can, it seemed like it might be time to start a remote-play game.  Since Taylor & Dave had been begging me for some time to run some kind of Mouse Guard game, it sounded like a good choice.

Hakett received a mission from the matriarch a bit earlier in the season than is usual.  He and his patrol were to make their way southwest to the fallen settlement of Walnutpeck to look for evidence of new weasel activity.  They'd still need to perform the other expected Guard tasks for this time of year, however, and on their way to the first stop at Ivydale encountered a section of the road that had been completely washed out.  Deciding not to perform the 'quick fix' through the brambles atop the hill, they backtracked to the neighboring valley and cut a new path south.  While doing this, they encountered a wandering badger, which they managed to avoid - but its presence so close to Lockhaven and Ivydale was concerning.  Upon reaching the settlement the next day, the guardmice discovered a pair of young mice from the settlement had gone missing...

Corruption Arcana: Ghosts in the Wood

This is a new game we put together for my brother-in-law Michael.  He wants to run a Fate game himself, but is having a difficult time getting people together.  Also, while he's read the book, he wanted to see how it plays out at the table.

We had already decided on a "traditional" fantasy genre, but we set up the remaining game aspects collaboratively as suggested by the Fate Core rulebook.  What we came up with was a high fantasy setting, based on a lost civilzation, where magic is being corrupted and the PCs need to find out why - or at least how and stop it.

[Michael] Jace - Soldier without a Kingdom

The group heard rumors of a cult that was speeding the corruption of magic in the world - and that they might be based in the ruin of a small keep in a forest some distance to the south.  Upon arriving, they were met by a group of goblins fleeing from an angry ghost.  Cassia was able to catch one of them and get from it that they were working for a sorceror, mining gold beneath the keep.  Goblins inside the structure itself were more hostile than terrified, however, and the group had to fight two of them off before they could proceed deeper into the ruin... 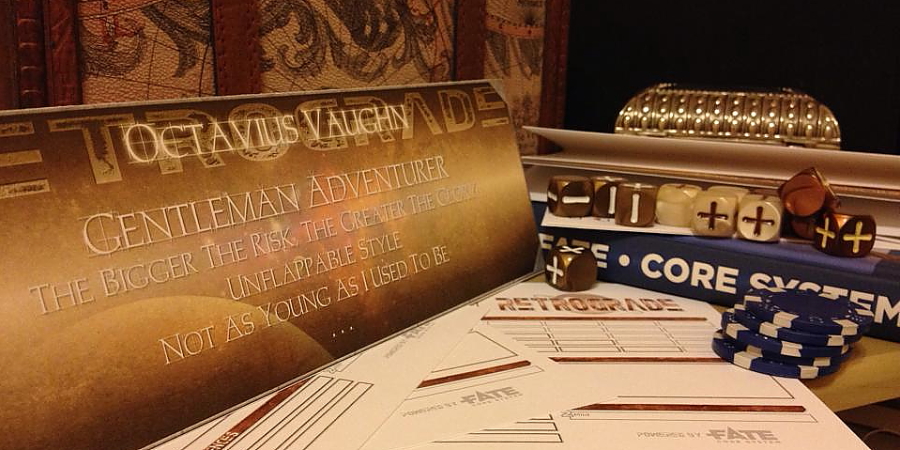 In which a team of explorers venture to the second planet to re-establish contact with a wayward botanical research station and discover a damaged satellite, energy-eating plants, violent lightening storms, a german u-boat, an enourmous predator, and hallucenogenic wasps.

The Zero Line: Behind Us

- The group helps some insectoid formerly-human locals repel a Tetrani attack and learns about the bizarre history of the research installation.

The party helped re-establish order on the Defiant, set out to discover the fate of a military research site in a larger crater on the planet Nago II, and were unexpectedly attacked by aerial Tetrani forces as they made their approach.

The group deals with some aftermath on the ship after crossing the Zero Line, including an emergent biomorph, some twisted monstrousities, crazed crewmen and belligerent computer systems.

The Zero Line: Through the Gauntlet

The group explores the derelict frieghter, discovers it comes from beyond the Zero Line, and reports to the captain of their ship, who, in turn, gives the unprecedented order to jump the Line.

The Zero Line is a sci-fi setting based around emergent psionics in the context of an impending galactic apocalypse.

Group is assembled by by the Galactica Humanus Navy, Delphi and the Periphery Initiative to explore a far-periphery system.  As they were about to set out, the GHN informed them their mission has changed and they were instead directed to investigate a derelict freighter which recently appeared in a coreward system.