If you're the superstitious type, you might suggest that the title of my last blog entry was tempting the fates...    ...but then, I'd probably have to pat you for it.

Much is different since my last blog entry, and some of it is responsible for the gap between posts.  Most relevantly, I am no longer working for Legend Web Works.  I have a wide array of thoughts on this particular matter, but I do not wish to belabor them here.  Further, if you're reading this you probably already know about it - I simply wished to state it for posterity.  This is generally the case for most things on my blog and this entry is no exception.

So now I'm looking for a new job.  Unfortunately my particular area of expertise is rather narrow in scope and directly-related opportunities in this area are somewhat limited.  I've found a few leads, but things seem to be slow in developing.  I'm not entirely sure what to do and I'm a little stressed about it, but I haven't hit a brick wall yet, so I'm still trying to be optimistic.

Anyway, on to happier things:

First and foremost, Sheri is pregnant!  We're going to have a Bunguin!  We actually saw the first ultrasound yesterday, which admittedly doesn't look like much at this point - but still.  The expected due date is May 14th 2011.  We're really excited!

Secondly, as I mentioned previously, I finally got to go to Gencon back in August.  It was pretty awesome.  The Exhibitor's hall was an amazingly geeky mall full of cool stuff, but the most fun was hanging out and playing games with the Playgrounders and a bunch of guys from the Fear the Boot forum.  I have a few souvenirs from the con including a new set of dice, the Savage Worlds Explorer's Edition, and a lanyard from the Fear The Boot guys.  I really liked it, and I'd like to go back at some point, but my favorite parts were things that didn't have anything to do with the con itself - things like Chris's Battletech game.  I think i prefer less commercial and more gaming - things like our local mini-cons.  Also, I'd really like to go out to Fear The Con one of these days.

On that note, we had Gamesplosion back in late August - our third local mini-gaming-convention.  This one, I believe, was the biggest one to-date.  It was held at our place for logistical reasons, and took place from friday-sunday as usual.  I ran a session of Mouse Guard and one of my own homebrews called Bot.  I played in a Weird War II (Savage Worlds) game, and played Agricola during one of the other slots.  It was definitely a great time.

And of course, I've been continuing my normal gaming.  We started a D&D game using the Sandstorm rules/setting (along with some stuff from Unearthed Arcana), and that's been interesting.  The WoD game has resumed and is starting to build in the "action" dept.  I've also spent quite a bit of time reinterpreting the Battletech rules into Savage Worlds - this is intended to make 'mech combat a bit more fast-paced and also tie a roleplaying system directly into it.  Sheri and I playtested it a bit, and I was quite happy with how it played.

We were finally present for Robb's "Talk Like A Pirate party" this year, which was lots of fun - and the location of perhaps the most epic nerf war we have witnessed to date.  Another item of note related to this is the piratey shirts Sheri's mom made us for it - they're really cool and I think they'll be handy for a few different costumes should the need arise.

Robb and I have been jamming with Josh & Bill again, which has been cool.  I think we're supposed to do that again soon.  We've picked out about 5 cover songs and we're just going over them again and again as we try to gel as a group.  It's been a lot of fun - I really missed getting to play with a band.

Finally, as I'm sure you've noticed, my site has been reincarnated yet again.  This is partly due to my job situation - I really didn't want to keep it on any framework related to my former employers.  It just felt...odd.  This rebuild is being constructed purely according to my preferences.  As of now, it's still under construction.  The blog was the first piece - additional pages will come online in the coming weeks as I'm able to build them to my taste.  Also, there is, as of now, a very modest mobile site (which looks awful on a pc), currently only capable of reading and commenting on the blog - but I'm sure I'll start working on it after the main site is completely set.  Accessing www.penguinsushi.com on a mobile device should direct you there. 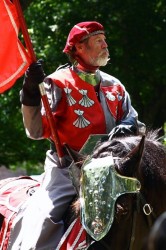 We don't have too much going on this weekend. I think we are/were going to go walk around at a nearby park (and check out some bike trails), but it's raining at the moment - so that might put a damper on things.


Last weekend, however, was pretty eventful. The first weekend in June is the date of two different local festivals.

First, we went out to Rogersville to the Shakespeare and Friends Renaissance Faire (warning: their website is pretty hideous). It should, perhaps, be noted that I'd never been to a Ren Faire before, so I didn't really know what to expect. I think I had more fun than I thought I would - which is not to say I expected not to like it, I just didn't really know what it would be like.
There were some interesting booths, a lot of impressive costumes and some amusing shows. In particular, I enjoyed the jousting. The guys doing it explained a lot about the competitions, equipment and everything that goes into it.
I took quite a few photos of the faire which I posted on facebook.

Second, there was the Blue Plum in downtown JC. I've been to this festival a few years now. Unlike the Ren Faire, there's not too much to write about it, but we had a good time walking around with our friends enjoying the atmosphere. We also went to a pizza place downtown where we had one of our other friends as a waiter - that was pretty cool (I didn't even know he worked there).


On some gaming and related stuff:

In other news, my WoD campaign has been continuing nicely, though we've yet to get Curtis into it. I've also added some house rules to the core WoD system (surprise, surprise).
I love dice. They give you a nice, tangible connection to what's going on in the game world and they provide an element of unpredictability that's still connected through the rules to what a given character is generally capable of. Dice are great - as a player.
As a gm however, I've found they drive me crazy. I'm trying to juggle the narrative and keep each of the players engaged in the game and I find it to be a huge distraction when I have to stop, roll dice, calculate results and then report numbers back. Therefore, I've basically modified the system such that the players roll all the dice. The WoD system in particular lends itself to this with some only minor tweaks. We're still kind of trying this out and there will still probably be times that I'll roll a dice, but most of the time I'd rather that aspect stayed in the players' hands.
I've also been working on several gaming side projects including another simplistic thematic rpg (like Bot, but completely different in theme) and a couple of board games (which I may or may not be able to manifest).

Patrick ran his Star Wars game on thursday and we ran into a little bit of a hiccup near the end where the mechanics kind of broke down the fun, as it were. I also, unfortunately, found myself to be getting a bit frustrated as I tried to interact with a scene in a way that didn't seem to be jiving with the rest of the group (mostly my fault for not being clear enough).
I mention this not to criticize the game or the players - because I think Patrick's running a great game and the players are participating well - but to point out that even good games can get bogged down by one thing or another. It's just going to happen.
It's easy to look back and say "oh, well person X should have done Y", but when you're actually in the game that's not always so apparent. Still, I think the conversation Rucht, Patrick and I had post-game (even though it was quite late) about how we might address certain issues in the future (both as gms and players) was helpful if only so we didn't all leave on a complete down-note.

Oh yeah, and we gamed at Patrick & Stacie's new house - which is a pretty cool place and about half the distance from here as their old place.

We're two weeks from hosting our FOURTH GitP meetup. This year is shaping up to be much like previous years - which is to say, awesome. As usual, there are some people who can't make it that we'd really like to see, but there are some others we're glad to see returning and a decent number of new people to meet. I think it's pretty cool that this has become a Playground tradition and that people continue to flock to our little town for a great time.

And finally, I think I'm actually going to get to go to GenCon this year!(!!!) I've been saying I want to make it up for that for years now, and I'm excited that I'll finally get to do it. In addition to the con itself, there are a few hard-to-find gaming books I'll be looking for, a few random people I'd kinda like to shake hands with, and a couple of forum communities I'll be looking to hook up with for general fun-times and hanging out. Edit: Badges have been ordered. :)

While we're up there, we'll also spend some time with my parents & Sheri's grandpa. Also, the current plan is to rent a uhaul for the trip back so we can empty out a storage unit Sheri still has up there.