Well, i think i can say i'm able to walk again now. I don't need crutches, and I don't need the giant ski boot. It's still a bit sore from time to time (esp when i forget my anti-inflammatory like i did this morning) and i've been keeping it wrapped for good measure, but I think it's on the mend. Got a few more PT sessions to do, but they're helping and it's doing well.

Now more exciting stuff: we got to have a band practice yesterday! For our first time jamming together, i think we sounded pretty awesome, and it was a lot of fun. Man, I've missed that. I love my SG too - it's a great instrument. I don't play it enough because i usually play acoustic when i'm on my own. Hopefully this will become a regular(ish) thing. At this point, we're just gonna see where we can make this go. We're all wanting to write some great stuff to play together and hoping play some local shows when we're up to it. I'm excited about this. I really hope we can make it work.

Apart from that, we haven't done much. Oh, we did buy a Wii Points card at the mall on saturday & i downloaded Mario 3, which we can now play on our Wii. The Virtual Console thing is a pretty awesome idea.

I had my first Physical Therapy session for my calf strain today. It had been feeling considerably better for the last few days, and i was feeling bummed that getting around was requiring 10x the effort it ordinarily would. None of the exercises Chris had me do today caused it to hurt, though i could tell it needed stretched out. He also adjusted my boot such that i can now walk in it - though like I said, i wouldn't exactly call it walkin. The height differential combined with the stiff muscles make it considerably awkward.

This development makes me feel a bit better though.

Well, I was told on monday that if my leg didn't feel significantly better in 3-5 days, i should make an appointment with Watauga Orthopedics - and, predictably, this morning it hurt as badly as ever.

Around 2pm or so, we headed out to the JC Med Center to pick up my x-rays (which i'd called about earlier) so we could take them over to Watauga Orth. This seemed like it would be a pretty routine and painless operation (esp. since i was sending Sheri in after them). I guess it *could* have been, but when sheri came back out,we had a new problem: our jeep wouldn't start.

Now, It's been having intermittent problems for a while, I was just really hoping we wouldn't see any symptoms at least until after my leg healed up again. No such luck. I called my dad and we talked through some things in the manual, but there wasn't much we could do under the circumstances. After talking on the phone for about half an hour however, we tried starting it again and it started right up. I'm beginning to think that threatening to do something to my jeep by talking to my dad is enough to scare it into submission. Anyway, as there wasn't much we could do but go about our business and hope it continued to start, that's what we did - and, thankfully, we didn't have any more problems out of it today.

When we finally got to Watauga Orth. and in to see someone, they took another look at the x-rays (presumably for hairline fractures or something that the initial read might have missed) and quickly determined that my bones were, in fact, ok and intact, but that i must have actually *torn* my calf muscle. So, they fitted me with a brace, gave me some anti-inflammatory drugs, and told me to go do some physical therapy 3 times a week - which, luckily for us, i can do at milligan. I'm supposed to go back to Watauga Orth. in a couple weeks for another evaluation...so this is going to take a while to heal completely it seems. Personally, I'll just be glad when i can walk and sit at my desk without throbbing pain again...

EDIT: Oh yeah, and how many times do i have to answer the same questions? I mean, you'd think in this day and age people in the medical field would write things down - and that they might pass that info along to the people that need to know it. Any given question i was asked once, i was asked at least 3 times by at least 2 different people - things like: "where do you work?", "when's your birthday?", "how big *is* your dog?". Really people, i'm in pain. If you can do with me explaining it *once* instead of 4 times, i'd really appreciate it - and, if you haven't figured out how to communicate with each other yet, how about we just get everyone who wants to know in here and i can tell it to everyone at once. We'll even rent out a lecture hall if necessary.
Actually, it didn't really bother me that much - i just thought it was a little odd...and it was awfully fun to rant about.

So we got home last night after sheri's choir practice where i wrote the last blog entry - wherein pretty much everything was fine - and I had taken ally out into the yard to make sure she didn't have to do anything before bringing her back into the house. She was really wound up since we'd been gone all day, and was crazily running around in circles like some sort of doggy 500. It was quite amusing...to a very specific point. I guess i should have been paying more attention, but really, even if i had been, I never would have guessed this could happen.

As I was standing there, letting the dog run around like crazy, she ran *into* me. This isn't all that unusual for her - she runs into things with some regularity - quite hard, sometimes. Well, this time was hard alright - and it just so happened to be squarely on the calf muscle i strained a few weeks ago. Despite the fact that my calf had recovered such that it was only slightly sore once in a while, and the fact that it felt perfectly fine at the time, I went down.

It's now been about 10 hours, and it still hurts so bad when it moves at all - much worse than it did even the first time i injured it. In fact, it hurts more than any injury i can ever remember having. Ever. It has nearly made me physically ill just from the pain at times. Whatever i strained/bruised/stretched before feels like it has now been ripped/torn/broken completely.

For now, i'm sitting out on the couch trying to move it as little as possible and still remain in a comfortable position (difficult for someone as fidgety as me). I think we're going to the clinic later. I *hate* going to get medical care, but i'm afraid something is very wrong and it's not getting the slightest bit better (so far) on its own. Honestly, i'm quite scared i'm going to be immobile for a long time and/or need surgery or something.

Please pray for me. 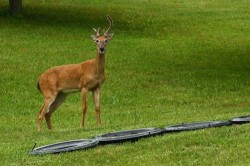 Well, this weekend has taken an unexpected turn for the crappy. Having got some last minute time off, Sheri & I were going to go on a camping trip for a couple few days. It was some last minute string-pulling, but we had everything sorted out by thursday afternoon...

...and then i saw a deer running through our backyard.

Now, generally deer running through our backyard doesn't inherently ruin plans. Thing is, deer running through our backyard is a somewhat uncommon event. In fact, I don't think i've ever seen it before. Granted we don't live in the most urban of areas, but we don't live in what I would classify as a 'rural' area either - so when I saw the deer run through our backyard and stop underneath a neighbor's (apple?) tree, i grabbed my camera and threw open the office window to take a few pictures. When I saw that the deer was quite content to stay where it was for a bit, i decided I'd try to get a little closer - so I headed to the front door and down the stairs on our front "porch" to head around from a somewhat concealed position.

At this point I need to point out that, in the excitement of taking pictures (which i *love*), there were a couple of factors here I had failed to consider completely. The first is that it was lightly raining. I decided that I wasn't worried about my camera - it wasn't raining very hard and my camera does have some weather protection. The rain, however, did result in the ground being wet - and the concrete slab at the base of the staircase is both inclined and significantly less textured than the concrete on the stairs and the porch itself.

Which brings me to factor number 2: i was wearing flip-flops. When i reached the bottom of the stairs and attempted to make a 120 degree turn to the backyard, I discovered that my flip-flops have *no* traction whatsoever on a slick, wet sidewalk.

I didn't actually fall, but my left foot immediately slid straight out from under me. This had the unfortunate side effect of me basically sitting down on my right ankle - which popped at least three times. And hurt. A lot.

Undeterred, I limped into the backyard where I got a handful of decent pictures of a young male deer (which are in the gallery) who was apparently eating apples from our neighbor's tree before i got too close and spooked it and it took off.

Now, usually when I do stuff like this to myself, I expect my ankle/leg to hurt for a few hours and then stop. Not so this time. It's been about 27 hours now, and it's still very sore - though considerably better than last night. I can't really walk without a serious limp & some occasional pain. It's actually my calf muscle that hurts so bad. I think i stretched/pulled/strained it. What sucks is that it's killed our camping plans. :-( Still, at this point, I'm just hoping it continues to feel better.