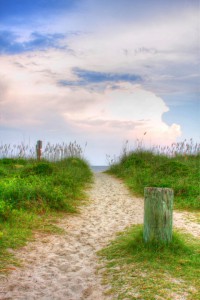 So we just got back from a little mini-vacation out to Edisto Beach, SC with my sister & parents.  We don't get to do "vacation" stuff very often.  I'd comment on whether Hannah had a good time, but I think she slept through 90% of it.  We certainly loved it though.

In fact, I'm kind of bummed now that I'm back to the norm.  I don't think I was quite ready.  Maybe I needed more than a 3-day weekend.

Apart from the typical fun of a vacation, I've got a point of potential interest.  My dad & I got to talking about HDR photography (mostly asking what it was) and I, of course, had my camera and had been taking a lot of pictures.  When I pulled them all onto my computer last night, I noted one or two that I thought could benefit from this technique.  Manipulating the RAW images into some pseudo-bracked exposures, I made a couple of composites which I think turned out pretty well.  I didn't do anything particularly special, but the process at least makes the photos a bit more like what I was actually looking at.

Also, I played beach kubb for the first time - which was pretty awesome.  A word of caution, however: this version has some new hazards.

The First Kubb-Out of the Season! 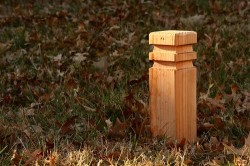 Yesterday was an awesome 77 degrees and sunny. There's something special about the first really nice day of the year - the first day that you really want to get out and do something. When that happens on a saturday, so much the better.

We decided to carpe the diem by making an afternoon of some kubb and an awesome cookout with a bunch of friends (before our previously-planned gaming session). I took a fair number of pictures, some of which will get posted at some point. It was good, good times. We definitely need to make a habit of this as the weather gets nicer...

EDIT: Pictures posted in the First Kubb-Out of the Season photo gallery! (some pictures of our much-belated christmas gift exchange also included ;))

Seeing as we're getting into the last nice days of the year (before it gets cold, that is), we decided it was time to stop procrastinating and make time for some projects: namely, finishing staining the wardrobe we bought earlier this summer, and stripping/painting the front door frame (so i can then seal it to keep water from getting into the basement) - so that's what we did for most of saturday. The wardrobe now just needs a topcoat, and the door is ready for sealing. We were quite productive, I'd say. Hopefully we'll have a couple of free evenings this week to finish these projects.

Also speaking of nice weather, we need to have a big Kubb-for-all before it gets too nasty & cold outside. I'm figuring we've only got a couple of weeks...

In more "fun" news, we've also be trying to put together some costumes for McKenna's birthday party on the 1st. This has been a lot of fun for me, as we've been trying to build costumes by getting individual pieces, as opposed to buying a pre-made thing. Trying to come up with ideas or ways to do things has been an interesting challenge. I think i've got mine* pretty much done. It looks pretty awesome for what it is, but i do wish i could afford the glasses i'd want to finish it off. Or the gun. Or a couple of other minor details, because i'm kind of obsessive that way. (also, myawwww!). Maybe if I ever wanted to wear it to a convention or something... ...of course then i'd need something for the hair as well... ...rambling thoughts. Anyway, I've found it's a lot harder when you're trying to emulate something specific, as opposed to just trying to have a fun costume. Still, i'm really happy with it.

Oh, and sheri totally beat us all at minigolf on friday night. By like 5 strokes. It was amazing.

Or, the "Second Annual Southeast-Trogland Giant in the Playground Meetup"

The meetup was an unbelievably huge success. Our gathering of 35+ forum members from all over the country (and even from canada!) here in Johnson City was an absolute blast. So many cool people, so little time in the weekend.

A short run-down of the events is as follows:

On friday, I went to pick up our first house guest, Krade, from the bus station. From there we went over to the Stable where we hung out with those gathered, played tetris and watched Dusty (Sir Dustin) run around the room chasing his chew toys.

By friday night, most of the others had arrived. We met in the basement of ginger's church where we had pizza, games & music.

On saturday we went out to the Greenwood Challenge Course, where we had an awesome cookout, played many epic games of kubb, and quite a few went up on the high-ropes course.

On saturday night, many of us met up at the Mid-City Grill - a cool little restaurant downtown that has good, cheap food and an incredibly relaxed atmosphere. Also, they're open till like 5am.

On sunday afternoon, we met here where we intended to have another cookout, but it rained so we had a pretty decent lunchmeat spread and played Wii for most of the afternoon.

Which brings us to this afternoon when Krade, the last one still in town, left around 2:30 after playing a rousing game of Grave Robbers from Outer Space.


That was quite a bit of a fly-by, but I couldn't possibly go into all the details of the weekend. You just had to be here. It was awesome. Can't wait till next year... ...though I am glad for some recovery time before then...

It was awesome to get to meet so many cool people, and fantastic to see some of the one's I'd met before again! :-D Words can't describe the coolness.


A gallery has been added for the event on the Gallery page. It contains 107 98 of the best pics from the weekend. :-)

Today was pretty epic. In the interest of making absolutely sure all of us had seen adequate muppetry, we invited a bunch (i believe the final count was 16 total(!)) of people over for the expressed purpose of watching Muppet movies. During the course of the day, we watched Muppet Classic Theatre, Muppet Treasure Island and the original Muppet Movie - all of which were very enjoyable.

In addition to this, there was pizza, card games and we even took advantage of the nice weather to play a couple of games of Kubb with those gathered. I (predictably) took a bunch of pictures of the festivities, the best of which have been posted here in the Muppethon Etc gallery.