- Dee Dee, Lexi, Sheri, Mandy (and her little brother Mace) made a new friend on their neighborhood playground - a boy about their age who was new in their part of town.

- While playing tag, they realized too late that this boy didn't know something: you do NOT go down the old, metal, spiral slide on the edge of the playground unless someone is waiting for you at the bottom - if you do, you don't come out.  The slide takes you to the Bogeyman's dungeon - where you stay until he eats you.

- As the new kid dove into the slide while running from Mace, they saw dozens of gnarled claws reach out and snatch him out of this reality.

- Mandy's mother took the children back to her house for their sleepover, but something dark was following them, and stephen seemed to be calling to them from wherever he was taken.  Shadows of goblins harassed and grabbed at them in the basement, and the girls ended up huddled in Mandy's room - slowly falling asleep.

- They found themselves next in a shared dream, at the base of the slide, before a yawning maw of a hole with a rickety wooden stairway.  From its depths, they heard a muffled cry and a malicious laugh...

Happy Valley: Into The Dark

Happy Valley: Into The Night (2)

"I've seen the counselors go up there.  They always use the buddy system."

Happy Valley: Into The Night (1)

"I'm squishing myself into the corner as tightly as I can."

"Then why are you scared?"

"We have to all hold hands in a circle, with one person in the middle, and sing the camp song..." 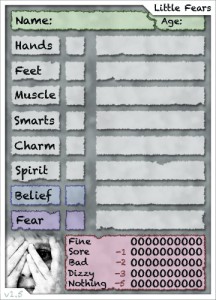 Another project I've been working on:

I really like Jason Blair's original Little Fears - The Roleplaying Game of Childhood Terror.  A lot.  The system is simple and elegant, the concepts are fascinating, and it's a lot of fun to play.  I have every intention of playing this game some more with a group in the future.

That said, after running it a few times, there are some ways I think the game could be improved.  It could be a little clearer on exactly how some the mechanics are intended to be used and how certain, common situations should be addressed.  I also think there is some room for mechanical expansion without making it significantly more complex as well - particularly when it comes to the mechanical expressions behind the central themes of the game: childhood Belief/Innocence and Fear.

I haven't had a chance to pick up the newest incarnation of the game, Nightmare Edition.  It looks interesting, but from what I've seen and read, there were some things I liked about the original a little more.  I got to thinking that what I wanted might just be some tweaks to what was already there.

Also, I have some new theme and setting flavors I'd like to do more with.  Kind of a new lens with which to examine some of the ideas presented.

To this end, I'm currently in the process of putting together a J-classed "revised" version of the original game - kind of a set of house rules and system mods.  I won't be pubicly distributing this for legal reasons, but those of you who read this blog and may be playing in such a game in the future might be interested to know what I've been up to.

Also, here's the Little Fears website.  You can read a bit about what they've been working on and check out some of the new stuff - it does look pretty cool.