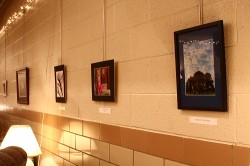 Well, my photography show "opened" at WAPC yesterday evening. Some of my friends were there to show some support and hang out: Robb, Edie and Llama came and so did Larry and Kris Rosolina...and of course Sheri was there :). There were also a fair number of people from Watauga as well - some of who I had met, and some whom I hadn't. Lots of people said they really liked my pictures, which was cool. Larry and Kris suggested I look into putting some of my work into next year's regional fair or possibly some other kind of photography show. I'll have to think about that - it sounds interesting.

I think I'll put up an online version of the gallery at some point - with the photos I chose and their names (which I had a lot of fun with and got several compliments on specifically). The gallery has a lot of still-lifes, a few landscapes, some pets, some small children and one or two other random shots.


Anyway, while we were hanging out there, our friends Ginger and William Galaini became parents of little Liam Ross. We've seen some pictures already (this expediency is one of the many reasons I'm such a fan of the internet and digital cameras! :)) and he shows signs of extreme cuteness and being one with the Force. As far as we know, Ginger and the munchkin are doing ok, but that's mostly because we haven't heard otherwise...I hope that gets confirmed soon.


Not much else of note has transpired. I did get some new stuff for my camera on friday : an extra battery (needed), a cable release (yay for tripod stuff), a lens hood (say no to flare) and, most importantly, a shiny new lens. At $400 it was the least expensive of the ones on my list. It's a 50mm prime with a 1.4 maximum aperture. It's intended uses are for low-light/indoor, fine depth-of-field and portraits. I'm still getting used to exactly how narrow the depth of field is at 1.4 on a 50mm lens only a few feet from the subject - like different-parts-of-peoples-faces-being-in-and-out-of-focus kind of narrow. Still learning on it and continuing to enjoy playing with it though.


Tonight we're going to a friend's birthday party. That should be fun times. :)


Nothing else to report here. Carry on.