Anyway, we've had a lot going on lately - not too much of which makes for good reading though.

Last thursday I finally finished the wardrobe we bought over the summer - it looks pretty good and functions wonderfully. It's nice to have something other than the cheap wal-mart dressers we had before.

Had a good game session / birthday party on saturday. That was fun. I got presents! Heh. Also, some of my friends got together to make some game-inspired snacks. We had Gnome Knuckles and Pixie Puree and a giant Cheese Ooze and treeant branches and all kinds of geeky goodness. The game was lots of fun too. It was a bit combat-heavy, but it makes up for the last session where there was none.

Sheri's choir had their Christmas Cantata on sunday - it went pretty well, i thought. We spent most of the rest of the day cleaning up in preparation for our lot-o-christmas-company.

Speaking of, sheri's parents and brother arrived early monday morning and it wasn't long before they'd fired up the wii to feed their bowling addiction. Hehe. Her grandparents arrived later that evening. We are having a full house, but it's fun. I'm excited to have people here for the holidays instead of traveling. It's a nice change of pace.

My camera flash came in the mail yesterday too! Much fun is had! I've been discovering all kinds of things with bouncing light off ceilings and walls. I've taken some really nice, natural-looking shots with it already. I have *also* taken a few accidentally lit pictures with some rather bizarre lighting when i didn't realize the flash head was pointed some odd way. Anyway, i'm loving this thing. It's such an amazing improvement over the little built-in pop-up.

Also, i got to hang out with Sam a bit yesterday. Good times.

Also, also - i need to finish my christmas shopping today. Yes, i know i'm way late. It's hard to find a good time to go when sheri's not with me.

So yesterday was my birthday. It was pretty much a normal day in most respects. Since Sheri had choir that evening, we really didn't plan much. I did finally put a clear-coat on the wardrobe that's out in our garage (it's almost done!).

It was a pretty good day though - I got phone calls from both of my parents and my brother and tons of birthday messages from friends. :-)

We're gonna have a gaming session saturday though (mayhem!) and i've heard a rumor that some aspects of the evening's festivities may pertain to my birthday.

As of about an hour ago, my costume for saturday's party has been completed. I've put an unnecessarily large amount of time into constructing this, but I've enjoyed it and I think it has turned out quite well. Its taken so long mostly because a lot of the pieces had to be fabricated/modified/repainted/etc in order to suit my purposes. Putting it on involves about 22 pieces and takes 15 - 20 minutes. Also, it's kinda hot so i may not be wearing the entire costume for the whole evening - but it'll be easier to take pictures of the others without some of the pieces on anyway. Still, it's pretty awesome. :-) 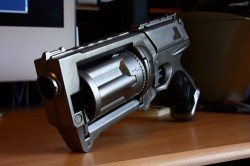 Ok, so this isn't really steampunk, but I like the titles so much i'm gonna label it that anyway.

Here's the second nerf gun i've mod'ed and repainted. Like its predecessor, it's functionally only about 95%. In this case, the cylinder doesn't always index correctly when the trigger is pulled, making it somewhat unreliable. It *does*, however, seem to be getting better the more i play with it. I suspect i got a little too much paint on some of the more sensitive moving parts.

It *looks* pretty awesome though, and it will compliment the rest of my costume nicely. Now all i need is some sort of holster.

I added some more pics of this one to the Steamnerf Gallery. 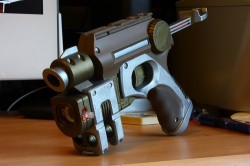 My first Steamnerf project has been completed. The gun is a little short of perfect on the functional scale, but it looks awesome and i'm quite happy with it. The trigger sticks a little (which i'm kind of hoping will solve itself in time) and the light site's timing is a little off as it doesn't illuminate until *after* the shot has been fired (not terribly helpful - but the thing itself is kinda lame imo). They're generally fixable problems, but i'm not sure how much i care at this moment.

For a first attempt, i'm quite happy with how it has turned out & I've made a Steamnerf album on the gallery page with a few more pics of the finished product. I'm hoping my next nerf mod project - Vash's gun - which is currently underway - turns out at least as good as this one has.

Seeing as we're getting into the last nice days of the year (before it gets cold, that is), we decided it was time to stop procrastinating and make time for some projects: namely, finishing staining the wardrobe we bought earlier this summer, and stripping/painting the front door frame (so i can then seal it to keep water from getting into the basement) - so that's what we did for most of saturday. The wardrobe now just needs a topcoat, and the door is ready for sealing. We were quite productive, I'd say. Hopefully we'll have a couple of free evenings this week to finish these projects.

Also speaking of nice weather, we need to have a big Kubb-for-all before it gets too nasty & cold outside. I'm figuring we've only got a couple of weeks...

In more "fun" news, we've also be trying to put together some costumes for McKenna's birthday party on the 1st. This has been a lot of fun for me, as we've been trying to build costumes by getting individual pieces, as opposed to buying a pre-made thing. Trying to come up with ideas or ways to do things has been an interesting challenge. I think i've got mine* pretty much done. It looks pretty awesome for what it is, but i do wish i could afford the glasses i'd want to finish it off. Or the gun. Or a couple of other minor details, because i'm kind of obsessive that way. (also, myawwww!). Maybe if I ever wanted to wear it to a convention or something... ...of course then i'd need something for the hair as well... ...rambling thoughts. Anyway, I've found it's a lot harder when you're trying to emulate something specific, as opposed to just trying to have a fun costume. Still, i'm really happy with it.

Oh, and sheri totally beat us all at minigolf on friday night. By like 5 strokes. It was amazing.

The view from the end of summer

Summer has faded into fall just a bit. The weather has been awesome the last week or so - highs in the 60's & 70's. A little rain, but for the most part, beautiful. I love this time of year.

Not too much has been going on here since we got back from vacation. Just kinda getting back into the normal subroutines - so this post is pretty much just that.

Last saturday was our church's 'Block Party' event. Basically, we had food and music and were trying to get to know some random people in the community. I had quite a bit of fun taking pictures of the band. I think it went pretty well despite being relocated when it started to rain.

A few of us went to the new(ish) german restaurant in downtown JC last night. It was quite tasty, though i wasn't nearly hungry enough for the amount of sandwich i got. I thought the building itself was pretty cool - it was a corner lot of a downtown building complex(? what do you call that?) that had a kind of loft (where we sat) and a west-facing window that caught a lot of the setting sun. Our waiter was really friendly and knew what he was doing. They even had live music - a german vocalist accompanied by an accordion. It all kind of sounded the same (to me, anyway), but it was at least interesting and different. It was a pretty cool place all around i think, though i have to say the hostesses' uniforms were trying a bit too hard... ...in at least a couple of different ways.

Today was the second day of the Apple Festival in Erwin. We went out to help with our church's fundraiser - in which they let people park in the lot for said festival for $5. I think it went pretty well and raised a fair amount of money for the youth group. We walked around the festival a bit after too. I took a few pictures of the mayhem. I got a bit really sunburned through all this too.

Speaking of church, i've been trying to put together the beginnings of a website for them. Again. They've been wanting to do this forever, but, well, our church just takes a longer time getting around to certain things than other people might... ...so i thought i'd put something together and we can all go from there (instead of waiting for people to get around to giving me info).

I did notice one kind of funny thing while we were out there today: A few teenage kids were walking down the street toward the festival, and they happened upon the spot where I had parked the jeep. They stopped, and I noticed one of the kids point at the D&D sticker in my back window. I'm not sure whether they were saying "hey, look at this loser" or "who in Erwin plays d&d?" or what, but it was kind of amusing to witness.

Speaking of gaming, our last session was about a week ago. It was a good one, though almost all combat. A few things happened (or didn't happen) that may have some unforeseen consequences next session or later. That game is approaching the 1-year mark, and it continues to be very enjoyable.

I've been trying to get some work done on my gaming project. I've made significant progress and it continues to get more and more interesting, but I still have a *long* way to go. I've contemplated setting a sort of deadline for myself to help motivate me... ...though i'm not sure if that would be good or bad for the creative process.

I've been listening to commentaries on dvds i have while i work (and/or do other stuff at my desk) a lot lately. I've found that amusing/random dialog is an enjoyable acoustic background - esp when i'm here by myself. In particular, i've been listening to the ones on the Red vs Blue dvds quite a bit, as i really enjoy the creativity that went into that project. I would totally try to do something machinimish if i could think of something truly original. It would probably suck, but i think the experience of learning to do some video editing/production would be cool. I haven't done any of that since high school, and the technology has completely morphed since then.

Sheri and I have been trying to think of some christmas presents for people. This is mostly Sheri's doing, as i probably wouldn't be thinking about this for another month & a half. We're coming up a little short on ideas, but we've got one or two. And at least some time.

So anyway, that's where my stream-of-consciousness ends.